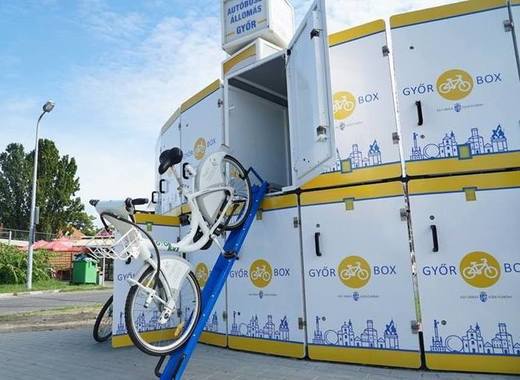 Gyor will soon be expanding its bike storage facilities. Last year the unique closed bike storage system in the Hungarian city called GyőrBox was launched with 16 bicycle stations. The network has now been expanded with two new stations on Zechmeister Street and Dunakapu Square. The repositories are located next to the GyőrBike stations.

The cycling infrastructure of Győr has undergone significant development, not only within the city, but also on its outskirts with bicycle paths connecting the city with the surrounding settlements being built. Soon, a further 600 million HUF will be invested, explains David Fekete, Deputy Mayor of Gyor. He added that the Győr-Bike bike rental is an important element of the system, and the GyőrBox is also an opportunity that allows more people to opt for bicycle transport, as they can store their bicycles in a safe and secure manner.

At the Visitor Centre of Győr you can redeem a card which gives you permission to use the system just like GyőrBike. You can charge this card and open the storage with it. There is a price of $ 1.00 per hour and the amount can be charged to the card. More information about the system can be found at gyorbox.hu.