In 2020, the lighting in the whole warehouse district will run on renewable energy 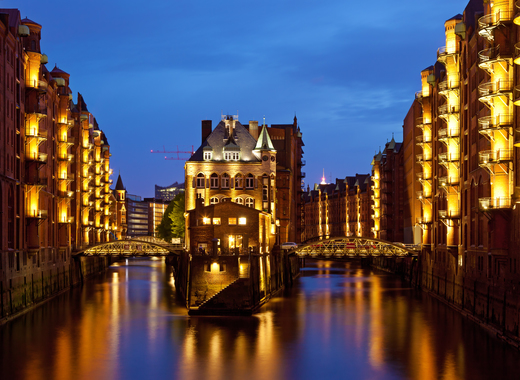 Hamburg’s renowned Speicherstadt is the world’s largest warehouse district. Its buildings stand atop timber foundations, made out of oak logs and was constructed between 1883 and 1927.

In 2009 the city of Hamburg embarked on a major redevelopment effort in the district, aiming to bring it in line with more modern urban visions while at the same time preserving its cultural and historic significance. In 2015, the Speicherstadt was awarded the status of a UNESCO World Heritage Site.

The Speicherstadt is visited by tourists not only for its museums, harbour tours and warehouses, however. Thanks to the efforts of the local non-profit Licht-Kunst-Speicherstadt, founded in 2000 by several organisations including the local government of the city, the warehouse district is also a giant luminous work of art – one that can be witnessed from dusk until midnight.

Now the local lighting is yet again being transformed – this time it will be taking on a somewhat “greener” undertone. Joining in on the city of Hamburg’s overall very ambitious climate goals, the Licht-Kunst-Speicherstadt association has implemented a project that will see 1,500 lights in the historic district-run entirely on renewable energy, thus making the entire area more climate-friendly and in line with the local administration’s ambitions.

Dr. Roland Lappin, Chairman of the Light-Art-Speicherstadt Association and Chief Financial Officer of Hamburger Hafen und Logistik AG is one of the people responsible for the district’s overall years-long transformation. Through the HHLA’s efforts, the Speicherstadt has grown from a historic warehouse district into something much more.

“We started with particularly energy-efficient lights. We have been using energy-efficient, low-maintenance and long-life LED lights for ten years,” stated Dr. Roland Lappin. Following the most recent changes and starting 1 January 2020, the local light art project will also be entirely climate-neutral.