Historic Václav Havel tram returns to the streets of Prague 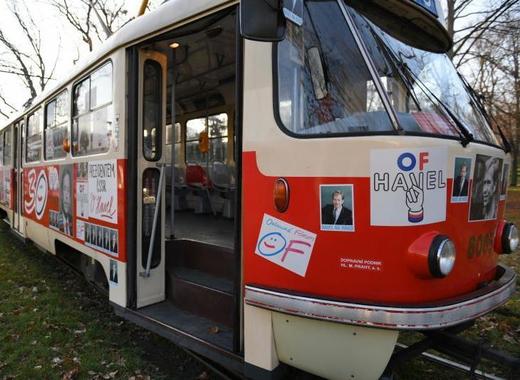 The legendary tram number 8085 is back on the streets of Prague. Its comeback commemorates the 30th anniversary of the last weeks of 1989, when the political direction of Czechoslovakia changed, and respectively - 30 years since Václav Havel used it for his presidential campaign.

By the end of the year, the tram will run on weekdays as historic line 23 and on weekends as line 2.  On the inside, it is transformed with contemporary photographs and information materials, prepared by Pavel Šťastný. The current design of the tram aims to commemorate the moments that led Czechoslovakia and today's Czech Republic to the path of democracy.

“When designing the tram, I tried to use contemporary photographs and added an anniversary logo for 30 years of freedom. The posters with Václav Havel and the OF logo were then all over Prague, and this was the first true image of free elections. This tram, passing through the centre, was the first big mobile source of election information. Without internet or Facebook, you had to experience it live” explains Pavel Šťastný.

“Exactly thirty years ago, the second major demonstration took place on Wenceslas Square and less than a week later Václav Havel announced that he would run for president. He had only 19 days to campaign, during which he turned into a strong leader of a new civil society and later a president known to the world. A part of Václav Havel's presidential campaign was the revolutionary tram 8085, which still carries passengers as part of the service of the Public Transport Company. For 30 years of freedom, we decided to "dress it up" again in its revolutionary attire, reminding us of the atmosphere of hope and cooperation of the day” explained Deputy Mayor for Transport of Prague Adam Scheinherr.