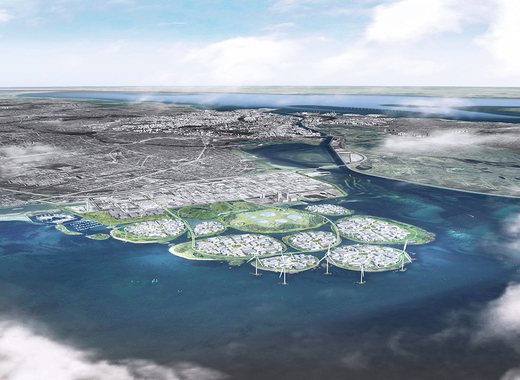 The Danish government announced plans to build nine man-made islands, located just 10 km south of Copenhagen. The 33 million square feet of new land that would help combat the changing climate is known as Holmene and will be designed by Urban Power design studio. The project will create over 10 miles of new coastline and 170 acres of recreational parkland. Construction is set to begin in 2022, with the first island being inhabitable within six years.

The largest of the nine islands will be designated for the largest waste-to-energy plant in Northern Europe. Bio waste and waste water from the regions 1.5 million citizens will be handled and turned into clean water and resources by the island. Combined with heat storage, wind mills and other eco-friendly technologies, the facility will be able to produce 25% of Copenhagen's electrical needs. The islands will house a tech hub, but also fight rising seas and storm surge. The artificial islands are expected to be home to around 380 new businesses and create 12 000 jobs.