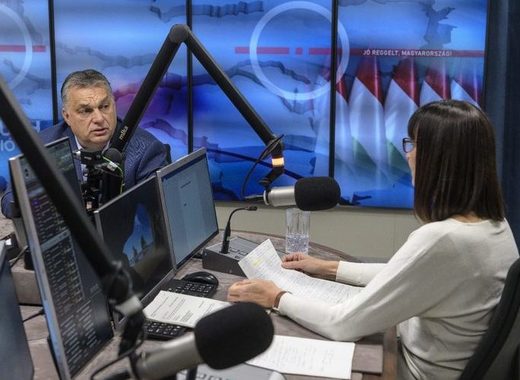 With coronavirus cases in Hungary rising relentlessly, the government extended yesterday the lockdown, imposed two weeks ago, for an indefinite period, using its powers to rule by decree. Prime Minister Viktor Orbán stated that the conditions across the country are very different, so mayors will have the opportunity to impose even tougher measures locally.

Speaking today about the epidemic on Kossuth Radio Good morning, Hungary! show, Orbán said that there are countries that are already "peeking out", but he does not yet see "the light at the end of the tunnel" in Hungary. He added that neighbouring Austria is a “laboratory of a kind” where things happen sooner, so the epidemiological situation there is closely monitored, and similar measures can be implemented eventually at home.

According to koronavirus.gov.hu, the number of confirmed Covid-19 cases in Hungary has risen to 1,190 on Thursday, while eleven patients died in a single day. All the deceased were elderly and had chronic conditions. The total number of deaths has reached 77 and 112 persons have made a recovery.

Chief medical officer Cecília Müller said at the regular Operative Board briefing that a significant part of the increase was caused by a hot spot in a nursing home in Pest, run by the Municipality of Budapest. 151 residents and staff there have tested positive for the coronavirus and seven have died, MTI reported.

Fidesz officials and media loyal to the ruling party were quick to lay the blame on opposition mayor Gergely Karácsony, accusing him of negligence. Karácsony countered that there was not a single central instruction that he had not complied with and demanded more aggressive screening of the population. “We need testing, testing and testing to protect ourselves, to curb the epidemic, especially where many elderly people live together,” the mayor of Budapest wrote on his Facebook page.

Judging from the experience of Singapore, Taiwan and South Korea, mass testing alongside stringent quarantine of virus carriers and monitoring of contact persons is key to containing the spread of infection. The Hungarian government doesn’t seem convinced.