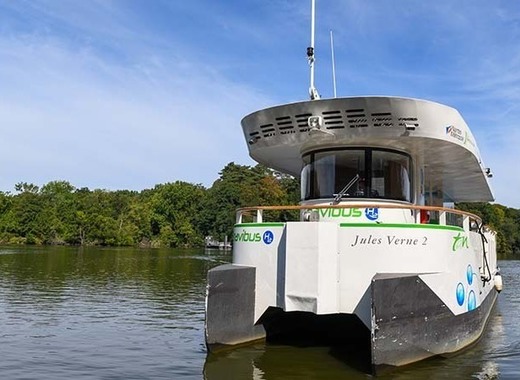 Nantes now offers waterway transportation of passengers with a hydrogen-powered shuttle. First in the country in the field of water passenger transport, Jules Verne 2 is particularly silent, safe and eco-friendly. Inaugurated last week, a trip on the board of the vehicle is just 3 minutes long – between the Port-Boyer and Petit-Port neighbourhoods. The Navibus operates with two hydrogen fuel cells, which supply the engine with electricity. The autonomy of the ship is five to six days and can transport up to 12 passengers, an armchair and between 6 and 10 bicycles.

The Métropole of Nantes has financed the shuttle with EUR 354,345 of a total investment of EUR 678,000. The French Environment and Energy Management Agency (Ademe) and the Region have provided the rest of the funding. Hydrogen is a storable energy source not related to CO2 emissions which can be produced everywhere, explains Bertrand Affilé, vice president of Nantes Métropole.

In addition to the new hydrogen powered shuttle, the authorities announced the inauguration of a new hydrogen power station. The operator Semitan has launched a shared hydrogen production and distribution station called MuLTHy. It is installed in the technical centre of the Boulevard Marcel-Paul in Saint-Herblain and produces 80 kg of hydrogen per day, enough for a full daily life of 40 vehicles. The station also supplies other corporate vehicles. The objective is to allow more long-term access to hydrogen energy on the territory and encourage companies and individuals to equip themselves with such vehicles. MuLTHY represents an investment of 1,970 million euros, financed by Nantes Métropole for 957,000 euros and European funds for 1,013,000 euros.