I sincerely hope that all the revolutionary transport changes will make our city more human-friendly, greener and inspiring for other cities in Poland and Europe

“TheMayor.EU may help people see what is going on in the municipalities in other countries and inspire them to find new solutions to their own local problems.” 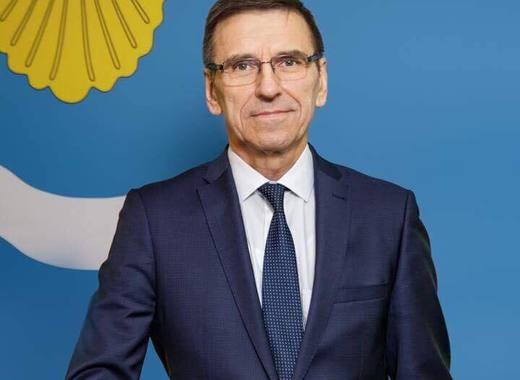 Piotr Grzymowicz is doctor of technical sciences - graduate of the Faculty of Civil Engineering ART in Olsztyn, Poland. He associated most of his professional life with construction. Grzymowicz was elected three times by the residents of Olsztyn City Council councilor (1998, 2002, 2006). From 2001 to 2007, he was deputy mayor of Olsztyn, responsible for the economy, development and investments. In 2008, the Minister of Regional Development appointed him to a team of ministerial experts in the field of construction, housing infrastructure and construction law. Since 2009 Piotr Grzymowicz is mayor of Olsztyn.

Mr. Grzymowicz, you are very active in the social media. In 2018, is this the way citizens can get in touch with the mayor?

I am trying to be active in a wide range of areas. Contacts via new media are as important as face-to-face meetings with citizens. Nowadays many people consider this modern communication as very comfortable. In addition, they may not have sufficient time to make an appointment or come to an arranged meeting.

That is why I am always prepared to respond to what is happening in the internet. I have my Facebook profile and I follow discussions under my posts to answer the citizens’ queries and react to their comments and suggestions. I also run my blog to comment on the current developments – primarily referring to the city life. Of course, everybody can contact me via e-mail and many people do so.

How would you describe your city briefly? What do you want our audience to know about Olsztyn?

Olsztyn is not only the biggest city in the Warmia and Mazury region but also the best place to work and live. The best because it is not very crowded and everything is within the walking distance. Thanks to the nature surrounding us we can work and rest almost at the same time.

The city is steeped in rich history. It was home to Nicolaus Copernicus who lived and worked here for a few years. Erich Mendelsohn took his first steps in architecture in Olsztyn. Scientists from the University of Warmia and Mazury take up exceptional challenges. We are also proud of our other eminent inhabitants – people involved in science, art and sport.

Within the last ten years we have totally revolutionized our public transport system. Olsztyn has the same problems as many other cities in the world: growing number of cars on the streets, traffic congestion, and unfriendly public space. We wanted to make our city more comfortable for inhabitants and to protect our precious natural environment. Luckily, it was compatible with the EU objectives – urban mobility and sustainable development. Thus, we were able to co-finance our biggest projects with the European Regional Development Fund.

We had analysed a few options on how to develop our public transport and the recovery of trams proved to be optimal for Olsztyn. Recovery – because trams operated in Olsztyn from 1907 to 1965, when they were removed due to lack of funds for modernisation. Their comeback at the end of 2015 started a new chapter in the history of public transport in Olsztyn.

However, new trams and 11 km of tracks were only part of the project. What is more, we built bus lanes to give priority to public transport vehicles and introduced Intelligent Transport System (ITS) including subsystems for bus and tram management, traffic monitoring, dynamic passengers information, ticket selling, city card, meteorological information etc.

What is the effect? Now we have:

But it is not the end. We have already started the second stage of this transport revolution. We are currently in the process of building a major intermodal hub at the existing main station in Olsztyn. In the future it will allow for interchanges between different modes of public transport: urban and suburban transport, regional and interregional rails as well as the rail bus connection with the Olsztyn-Mazury Airport. Also, we are going to extend the tram network, buy new trams, modernise and change the city road system as well as develop the ITS.

Furthermore, I am very pleased with the high level of public transport users’ satisfaction (over 70% of them consider it good or very good and only 4% is not satisfied – according to the last year’s users survey).

We are very interested also in participation in various international projects related to mobility. Now we are a partner of the SUMBA project (www.sumba.eu) focused on sustainable and green commuting in Baltic cities (Interreg Baltic Sea Region). We are involved with some other Interreg projects too, e.g. Interconnect (user-adjusted and more sustainable public transport services for regional and cross-border travels – Interreg South Baltic).

I sincerely hope that all the revolutionary transport changes will make our city more human-friendly, greener and inspiring for other cities in Poland and Europe.

What technological processes do you implement in the municipality services?

Olsztyn is getting more and more friendly for its inhabitants. This is noticeable in the field of digital solutions too. More and more city services can be reached via internet, also using mobile applications. The above mentioned ITS plays a great role in modern transport management in Olsztyn. However, we cannot forget about e-services that make people’s life easier. Inhabitants of our city can i.e. pay local taxes and charges online, make appointments with city officials via internet and then follow their cases in the same way. These services will be further developed by implementing a new project: Digital Olsztyn.

We run the Safe Olsztyn website (also by a mobile app) to inform inhabitants and tourists about threats, road accidents and other issues related to safety in the city. There is also one a bit unusual e-service in Olsztyn: a website and mobile app helping find a tomb on the city cemeteries.

These are the most important examples of modern e-services in Olsztyn.

Such initiatives are very valuable as the transparency on the local level of government is fundamental for democracy. Moreover, a platform like The Mayor may help people see what is going on in the municipalities in other countries and inspire them to find new solutions to their own local problems.

To better see the future of our city, we use a well-known tool: a development strategy. The Development Strategy for the City of Olsztyn 2020 sets out the vision of the city in 2020:

Olsztyn - a modern agglomeration with well-developed metropolitan functions, created by its unique natural environment, exceptional quality of life and competitive conditions for business

The document defines also basic strategic objectives as well as operative objectives stemming from them. They refer both to the social sphere and the need to strengthen the social capital, as well as to the whole area of the city’s economic development based on innovativeness and active search for external capital. The Strategy strongly emphasizes the significance of creating a friendly and safe public space coupled with the high quality of life and possibilities to run business based on modern and green technologies as well as on services.

Find out more about here.