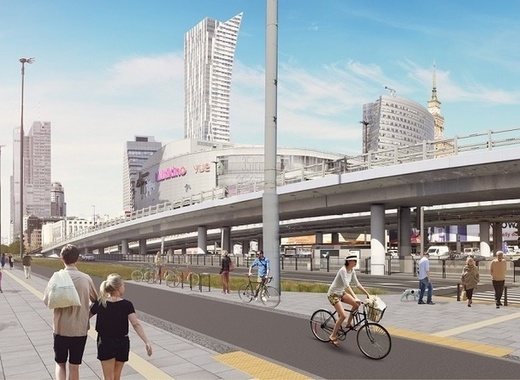 On Monday, the development of an important infrastructure project started in Warsaw. Namely, the reconstruction of Jana Pawła II Avenue and the Czterdziestolatka Roundabout has finally begun, reported local authorities. As the works provoke great interest among the local inhabitants, the city launched a website dedicated to the investment.

Keeping citizens informed about the progress of the works

The renovations are taking place in the central part of the Polish capital, where thousands or maybe even hundreds of thousands of people cross daily. As this is a recognisable and representative space, it is natural that the works spark powerful emotions.

Since the area will undergo dramatic changes, the responsible authority has prepared a set of visualisations to showcase what it will look like in the future. All technical documentation, including the design of permanent traffic organization and the design of new greenery, are also available for consultation, reassures the municipality.

After the end of the works, the roundabout and tram stops will be more easily accessible. Photo: City of Warsaw

All information relative to the project will be stored on a website, specially created to keep citizens up to date with what is going to change and for what purpose. The site will be updated on a continuous basis through its News section, promise officials.

Finally, in the coming days, the contractor will set up several information boards containing the most important facts about the investment. The boards will stand primarily around the Czterdziestolatka Roundabout.

Why is the project important?

The project claims to work towards a modern, accessible, green and aesthetic space which will be fit perfectly in the capital's downtown and which will be safer for all road users. It will create more space for pedestrians, improve accessibility to people of different physical abilities and to places on the Alley that could hardly be reached on foot before like the Central Station and the tram stops.

The first changes to traffic in Warsaw have already been made - with the beginning of work on Monday. The project is expected to complete on 30 November 2020.