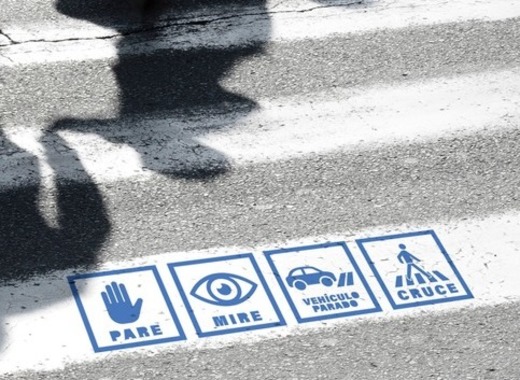 With a few easy steps the municipality of Paterna, Spain is making the city more accessible. As of December, the Valencian settlement will have inclusive pedestrian crossings near and around schools. This move aims to eliminate the effects of the cognitive barriers experienced by people with ASD (Autism Spectrum Disorder).

The ongoing project consists of the adapting of the pedestrian crossings belonging to the educational centres of the city by placing a sequence of pictograms painted in blue. These pictograms are believed to facilitate the interpretation of the road signs by those people who have difficulties in understanding. As we shared with you earlier, another Spanish municipality put accessible signage to good use – Jerez made its stadium accessible to a greater number of people with the same measure.

Making cities accessible for everyone

The need to implement this action has been explained by the Councillor for Social Inclusion and Equality Policies with the City Council of Paterna, Isabel Segura, quoted by paterna.es. Councillor Segura stressed that “the project of INCLUSIVE PATERNA has a dual function: to reinforce the inclusion and visibility of those living with ASD and, in turn, promote their autonomy and perception of road safety through an active methodology. In addition, pictograms can help persons who have functional diversity, like older people or children”.

The objective of this measure is to enhance the image of Paterna as a universally accessible place, a quality that helps everyone among 70 000 local inhabitants understand, use, participate and enjoy the urban environments with autonomy and comfort. The Pedestrian walks –Inclusive Paterna Project, which will be completed this month, thus focuses on cognitive accessibility, allowing people with different understanding needs to use them.