The Rose Fitzgerald Kennedy Bridge is part a bypass which will cut journey times between Cork and Rosslare, attracting investors and tourists 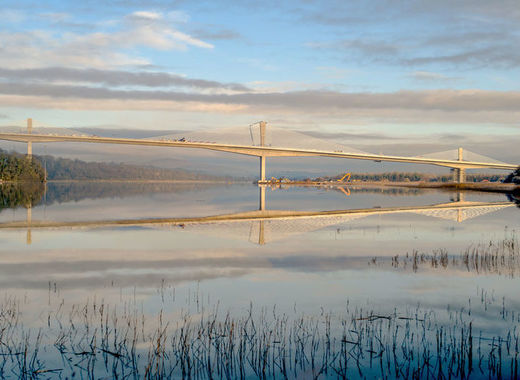 With its 887m it is the longest bridge in Ireland. And it is named after Rose Fitzgerald Kennedy, the mother of iconic US President John Kennedy. Apart from these curiosity kindling facts, it is part of the New Ross bypass which will cut journey times on the N25 highway between Cork and Rosslare by up to 30 minutes.

As reported by public broadcaster RTE, the bypass was officially opened yesterday by Taoiseach (PM) Leo Varadkar with Rose Katherine Kennedy Townsend, a great-granddaughter of Rose Fitzgerald Kennedy and grand niece of the late president. The new road is open to traffic as of today.

Wexford County Council and Kilkenny County Council, alongside Transport Infrastructure Ireland, were instrumental in the implementation of the project which took more than 20 years of work and cost €230m.

The Rose Fitzgerald Kennedy Bridge is built over the River Barrow which crosses the counties of Wexford and Kilkenny and will bring the counties further together.

Apart from helping drivers save on journey times on the N25, linking Cork and Waterford with Wexford and Rosslare, the new road is aimed at improving access to the modern Rosslare Europort in County Wexford and generally making the region more lucrative to future investment.

Peter Cleere, Chairman of Kilkenny County Council, quoted by RTE, described the bridge as "an engineering wonder", which will become a tourist attraction in its own right.

Michael Sheehan, Chairman of Wexford County Council said in turn that the opening marks "a new chapter" and means the region is "now ripe for a new era of investment, industry and interest".

The new bypass is a follow-up to other major road schemes in the southeast of Ireland. One such is the Enniscorthy bypass, linking with the M11 along the east coast, which was inaugurated last year.

Jean Kennedy Smith, the sister of JFK, was the one who suggested that the bridge over River Barrow be named after their mother. To all who are in the dark - the Kennedy family hails from Dunganstown, less than 2km from the new bridge.