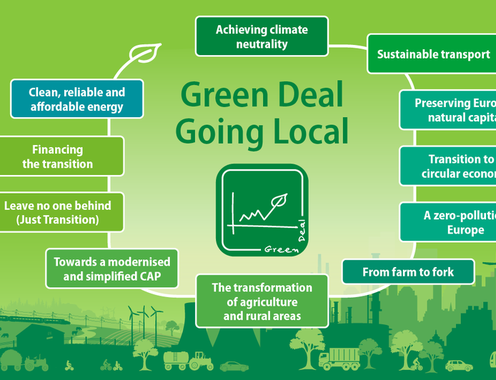 The European Committee of the Regions (CoR) launched a call for best practices linked with the priorities of the Green Deal. The EU institution representing the local and regional authorities invites its members and young elected politicians to collect, display, promote and boost the replication of low-carbon projects across the EU. The objective: showcase how cities and regions play a key role in delivering change.

Bringing change from the local to the EU level

Realizing that cities and regions can play a key role in delivering the Green Deal, the CoR turns to its members and Young Elected Politicians to share examples of what works in driving the EU closer to climate neutrality.

The selected projects will be on display on a special platform, published in the CoR's Green Deal Going Local interactive map and promoted among EU institutions, stakeholders and the press, in particular during the 18th European Week of Regions and Cities which will take place in October 2020.

Best practices will also be included in a report on the Green Deal, which the German Presidency of the Council of the European Union has tasked the European Committee of the Regions to deliver in the second half of 2020. Finally, with this initiative, CoR wants to show why cities and regions need to be at the centre of the recovery strategy and where priority investments must focus on.

Which projects are eligible?

All ongoing and recently completed projects and initiatives that are considered to contribute to delivering the Green Deal and move Europe closer to climate neutrality are eligible: from energy efficiency in buildings, to the deployment of renewable energy sources, clean mobility, the protection of biodiversity or circular economy initiatives.

The projects must contribute to decreasing CO2 emissions in the sectors covered by the Green Deal, the EU's new growth strategy to achieve climate neutrality by 2050, in particular:

The call is open to Members and alternates of the European Committee of the Regions and participants of the CoR's Young Elected Politicians Programme (YEPs). They should complete the online application form before 21 September.