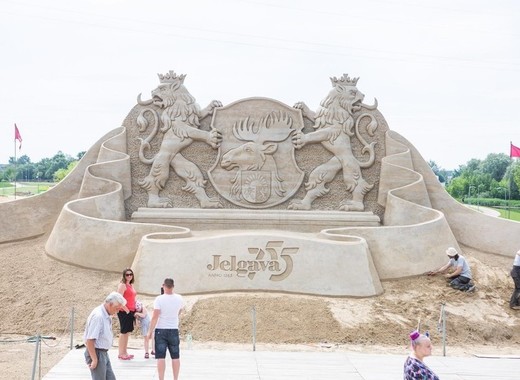 The authorities in Jelgava reminded everyone earlier this week about the town’s 755th anniversary and the special way of commemorating it with the opening of majestic sand sculptures park on Pasta Island, located in Lielupe River – the city’s main water vein. The works of art made of sand are designed to recall different events from the town’s glorious history and will be available for viewing until October.

Jelgava is considered the capital of Zemgale, one of Latvia’s four cultural regions

Residents and visitors to Jelgava will be able to head to the river island and admire 10 meticulously created sculptures. It is not accidental that the exhibition should be placed on an island because as records show the first fortification attesting to the origins of the town were built by crusader knights of the Livonian Order somewhere around 1265 on the neighbouring island of Pilssala.

Visitors will be greeted by the imposing representation of the city coat of arms (seen on the photo) upon entering the area. After that following a chronological order, they will be able to admire 3D representations of some of the famous historical personages and events that had some connection with Jelgava.

Among those the sculpted figures, one can see ancient hunters of reindeers, the first inhabitants of the Lielupe banks, knights from the Livonian Order, Duke Jacob of Courland and Semigalia, the first air balloon flights in the area, characters from the plays of Adolf Alunan, members of the famous local rock band Prāta Vētra and also production in the Jelgava sugar factory.

In between the sculptures, visitors will also be able to read informational board which tell them interesting facts and anecdotes about the town. For example, a story about the time the French king stayed at the Jelgava Castle or how the coat of arms was created.

The park is open every day between 10:00 and 20:00. Tickets can be purchased online or at the entrance – 2 euros for adults, 1 euro for students and retirees, free for children under the age of 7.