Jiří Svoboda: The city will not be saving on investments, we want companies to have work 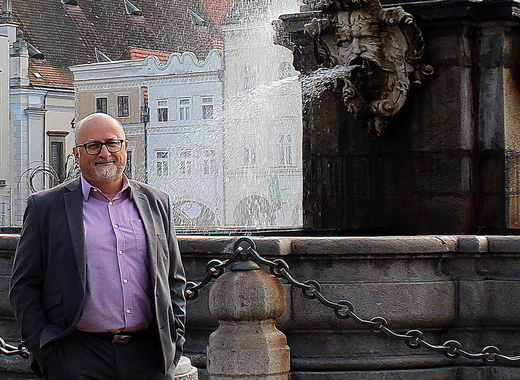 Ing. Jiří Svoboda has been the mayor of České Budějovice since 2014. He has a diploma in Mechanical and Electrical Engineering. He formerly worked as a reactor operator at ČEZ, Head of the PR Department and the Spokesperson of the Temelín Nuclear Power Plant and held various managerial positions with the Czech Radio, among others.

In this conversation, he discusses how the city will be recovering from the Covid-19 pandemic, the importance of smart city development and more.

Summertime on the banks of Malše river can be really relaxing. Photo: City of České Budějovice

Mr Svoboda, would you tell us a few words about České Budějovice: which are your favourite places, what do you like the most about your city?

Czech Republic, South Bohemia, České Budějovice. And then the river Blanice and its surroundings. The atmosphere, its history, pleasant environment, people, the many leisure opportunities, good reputation, sports achievements, gastronomic offers and beer.

Developing České Budějovice as a smart city is high on your agenda. Can you tell us about the most exciting projects in this direction that have been implemented or are in waiting?

The smart city concept is one of the topics that the city of České Budějovice adopted for 2017-2027 as part of its strategic plan. I personally see the smartness in the fact that the city should be moving towards modern combined solutions.

For us, one of the key topics is electric mobility and also, of course, ecology, waste management. This is understandable within the South Bohemian Region because southern Bohemia is renowned for its beautiful nature, and it would be a shame to burden it with transport emissions.

The coronavirus crisis caused losses of hundreds of millions of Czech crowns. How will you manage this situation? Which planned investments will be pursued, and which ones will be postponed? Do you expect financial assistance from outside?

You could say that good and responsible management has paid off for us in the past, and now we can implement the prepared 677-million-crown investment plan with only a small limitation. All the events planned and started this year will be duly completed if the epidemiological situation or other unforeseeable circumstances allow.

The city of České Budějovice will be saving on operating funds, not on investments. We want companies to have work.

Recently, the city decided to sell its share of the České Budějovice Airport. What prompted this decision and what will the funds from the deal be used for?

For a while, it was logical to support the airport because the project was expected to be of great benefit to, for example, tourism or some companies in the region. The city has put tens of millions into the airport’s operation since 2005, but the original expectations have unfortunately not been met.

Therefore, it was no longer affordable for the city of České Budějovice if the operating costs of the airport paid from the city’s budget continuously increased without the prospect of any return.

I think that it will also be more advantageous if the second shareholder - the South Bohemian Region - negotiates about the airport’s future strategic partner from the position of a 100 per cent owner.

The proceeds from the sale will be used to reduce the budget slump caused by the coronavirus crisis.

The city introduced the participatory budget for the first time in April. How did the residents accept this innovative measure?

This year, for the first time ever, the citizens of České Budějovice were given the opportunity to be actively involved in the running of our city through the participatory budget. They were allowed to submit their ideas or the changes that they found beneficial, useful or even just pleasant. The total number of 51 submitted projects leads me to the conclusion that the citizens consider this project to be interesting.

Your re-election to the post of Mayor of České Budějovice in 2018 proves the support of your fellow citizens. What do you consider to be your greatest achievements so far and what is yet to be done during the current term?

I do not think that I can claim some kind of credit for my re-election. It is the voters’ statement to the work that was done (by the whole city management) in the last election period, and apparently the voters judged that I had made few mistakes.

What I consider important is that we managed to involve the public, companies, schools at all levels, the church, the cultural community, athletes and others in the preparation and elaboration of the city's strategic plan, which we have approved for 2017-2027 and which we are following for the third year in a row.

We deal with problems and demands for which there was a general consensus. At present, we would like, among other things, to make more progress in the preparation and implementation of the “Waste-to-energy plant”.

Is there any project or an innovative practice from České Budějovice that you would like to share with the other mayors in the European Union?

We defended our first place in the Friendly Office competition within the South Bohemian Region. This shows that we perceive our work as a service to citizens and use the available resources to simplify and speed up the handling of the affairs of residents and companies in the city.

We have also come a long way in terms of electric mobility in relation to public transport, and we exchanged experiences in this area at a conference we co-organized with the Norwegian embassy last year.

Our heating plant has set out on a green path, and we will be abandoning coal combustion in the foreseeable future. Heat will be partly sourced from the Temelín Nuclear Power Plant, partly produced in the “Waste-to-energy plant” and partly obtained by burning wood chips, for stable heat prices in the long term.