Outside the EU, Kruševac in Serbia was the big winner 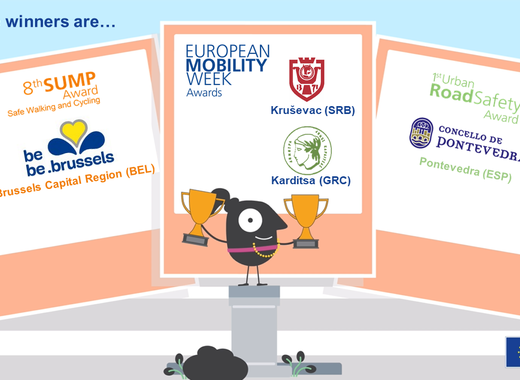 The laureates of the 2019 European Mobility Week Awards were announced yesterday. The big winner among the large municipalities is Kruševac, Serbia, while Karditsa in Greece went home with the same prize for small municipalities. The 8th Award for Sustainable Urban Mobility Planning (SUMP) went to Brussels-Capital Region of Belgium. Finally, the first-ever EU Urban Road Safety Award was given to Pontevedra in Spain.

Karditsa partners up for sustainable mobility

What impressed the international expert jury of the awards’ committee was the widespread promotional campaign for sustainable mobility in the Greek city of Karditsa. Dozens of organisations, including schools, music academies, government departments, police, fire brigade, civil society organisations and businesses, joined the municipality in the initiative.

Some of the activities that contributed to the city winning the recognition were the financial benefits for companies introducing sustainable mobility measures and granting days off of work to employees who commuted by bicycle or on foot.

Likewise, strong citizen participation and political support to spread the mobility message of 2019 were observed in the Serbian city of Kruševac. The pedestrianisation of the city centre and its suburbs, the transformation with bicycle paths walkways, public squares, urban parks, benches and even swings during the EUROPEANMOBILITYWEEK were at the heart of the reason for the Serbian candidate’s successful nomination.

In ten years’ time, Brussels region aims to have zero road traffic deaths, to have restricted car usage and to have reduced the speed limit to 30 kilometres per hour as early as next year and to have increased the number of pedestrian zones. This so-called ecosystem, together with an innovative planning concept helped the central region of Belgium to get the 8th SUMP award.

The Spanish city has managed to practically annihilate road deaths between 2011 and 2018 thanks to careful monitoring of policies and increased active mobility. A number of impressive measures convinced the jury to reward Pontevedra with the first-ever EU Urban Road Safety Award.

Safe walking and cycling across Europe

The European Mobility Week is a campaign of the European Commission, which runs for one week in September and provides cities and towns with an opportunity to test sustainable transport alternatives. Last year, more than 3100 cities and towns participated, which according to the organisers is the greatest success of the campaign to date.