A ban on transit car traffic will open more space for pedestrians, cyclists and leisure activities 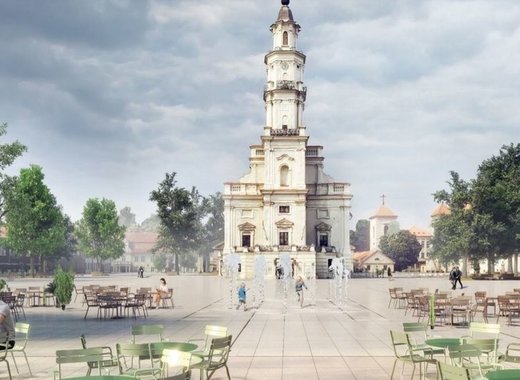 Major repairs are in store for Kaunas Town Hall Square, as evidenced by project proposals published on the website of Kaunas Municipality. The aim of the project drafted by SOMA Architects is to "clean up", reorganize and re-plan the square, eliminating transit car traffic and giving priority to pedestrians and cyclists.

Renewal based on old look

Town Hall Square, the main and oldest surviving square in the territory of Kaunas Old Town, was formed as a result of the city expansion between the castle on the embankment of Neris River and the port on the Nemunas River. Its main highlights are Kaunas Town Hall building and Maironis Monument, dedicated to Kaunas priest, poet and proponent of the Lithuanian national identity Jonas Mačiulis (1862–1932). The square acquired its current form in 1972, after the implementation of the project of architect D. Juchnevičiūtė.

At present, the pavement and small architectural forms of the square (benches, rubbish bins, tree edgings) are worn out, and there is a lack of engineering equipment for organizing events, SOMA Architects point out. Their idea of a new square is based on its past looks when there was no transit traffic there and the boundaries of Town Hall Square were determined only by the buildings standing on its perimeter.

Given that the boundaries of the square have not changed much during historical periods, and the original square was not bordered by streets, the aim is to bring that "unlimited" square back to life without resorting to any physical space-programming barriers. As the square is currently too crowded and lacking monumentality and representativeness, extending its boundaries would allow for a more appropriate functional use of its spaces, say the architects.

Town Hall will stand out

Town Hall will remain the main accent of the renovated square, so its visual presence will be further emphasized. Special attention will be paid to the adaptation of spaces to people with different needs and removal of visual pollution.

A full ban on car traffic and parking on the perimeter of the square would give outdoor cafes more space to set up tables. A ban on cars entering parts of the square is already in place and the measure has been hailed both by residents and catering establishments. The project proposals will be presented to the public remotely on 23 November.