Krzysztof Żuk: In 2019 we are moving the investment to the districts 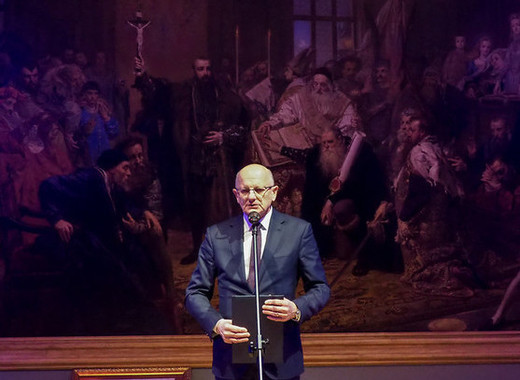 Mr Mayor, how would you sum up the year of 2018 in the Office? What issues and investments proved to be the most difficult and engaging?

As it is every year, the busiest were the Department of Investment and Maintenance and the Roads and Bridges Department. The heavy workload which needs to be completed in order to construct new roads and schools is not to be underestimated. Last year, we concentrated on improving the road infrastructure in Lublin.

The investment pace is fast, for which I thank all the employees engaged in the investment projects realization, in particular, those in the Department of Investment and Maintenance, the Department of European Union Funds, and the Roads and Bridges Department. The year of 2018 was also the period of continuing education system restructuring under the new education system reform. In April 2018, I appointed Mr. Mariusz Banach, who is indispensable in educational issues, to execute this task. Along with the whole Department of Education, he is facing the challenge of enrolling students into upper secondary technical schools, general secondary schools, and vocational education schools, the so called “double grade level,” that is those students who are graduating from the eighth grade of primary schools and the graduates from lower secondary schools.

The Department of Environmental Protection, whose Director and employees worked hard to enforce the amended Act on Waste, also demonstrated strong commitment to their duties.

The coordination of changes pertaining to the waste disposal in the whole city, numerous informational campaigns for the city residents, as well as careful supervision of entrepreneurs are the credits of this department.

We appointed a new unit, the Information Security Bureau, whose aim is to oversee the processes pertaining to information and ICT security taking place in the Office and in the organizational units, under the newly implemented regulations on personal data security, the so called GDPR. Also, during the second half of the year, we underwent preparations to relocate the Transportation Department, in the interest of the service of the city residents.

What was this year for you personally?

It was a very intense time. This is due to the work done for the city, but also because of local government election. It is no doubt that the campaign was hard. I feel much better working for the city than being in politics. However, the results of the local government election prove that the vast majority of the Lublin City residents approves of our activities and of the strategy of the city development accepted by us, which certainly motivates to further work. I must highlight that the place in which Lublin currently is, including its intense development, is the result of the work of all of us – the employees of the whole Office and other city units. I rarely have the opportunity to state this. Every day, hundreds of persons work for our common success. The mayors of other big cities are jealous of the reliable and diligent employees that we have. The fact that we know how to share experiences is our asset: the younger employees learn from those who are experts in their fields. Owing to this, we have the combination of valuable knowledge with youthful enthusiasm and energy, which, in turn, results in timely execution of pending activities, and in the creation of a reliable team. I thank all employees for their everyday work, and I admit that I count on their involvement in the year of 2019.

The next year, full of new challenges, is ahead of us. What are your priorities in the city politics for the year 2019?

We are not slowing down the investment pace, but we are moving the construction sites into the districts, since such were the residents’ expectations. After the jubilees: the 700th anniversary of the City of Lublin and the 100th anniversary of Poland regaining independence, we are expecting yet another important anniversary of 450 years of the Polish-Lithuanian Union. Our residents have become accustomed to the fact that the anniversary will be connected with events aimed at all the interested parties. I hope that, apart from educational activities and city festivals referring to this anniversary, we will also prepare other interesting events for the residents and tourists, which will fill our hearts with joy. We will also be taking an important organizational test. We passed such one in the past during UEFA European Under-21 Championship in 2017. This year, FIFA has decided to make us co-organizers of the next FIFA U-20 World Cup which will take place in Arena Lublin. I trust that Lublin will pass this exam with the A grade.

Thank you for the conversation.

The interview has been generously provided by the City of Lublin administration.