It also ranks in top 3 in Europe 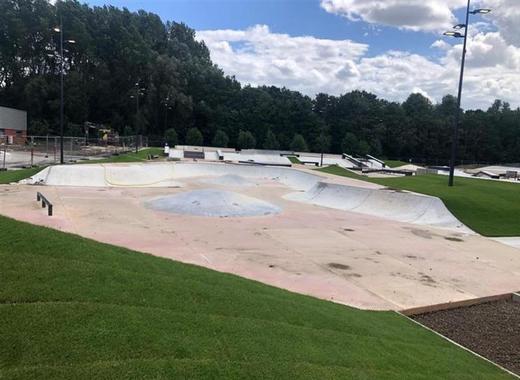 The largest skate park in Belgium opened on Saturday, July 18, with numerous displays of skills by top skating professionals. Located at Watersportbaan in Ghent, it boasts 4,000 square metres of surface and ranks among the largest in Europe.

The park has seven different zones and offers something for everyone: skaters, roller skaters, inline skaters and BMX riders. There is also an area for freerunners (340 square metres) and an oval track for roller derby.

Sport addicts are welcome every day throughout the summer, but reservations are required, in view of the need to contain the spread of COVID-19, inform the authorities. No more than 200 athletes are allowed in the park at the same time and an additional 50 in the separate kids’ area.

A plan of the facility. Image by Stad Gent

The local skating community is involved in the design and works

The construction of the park started in October 2019. Its site used to be a car parking, which was demolished and a new car parking lot with a walking path was built instead.

The project is a collaboration between the City of Ghent and Farys, with the support of Sport Flanders, the sports administration of the Flemish government. Farys is responsible for the maintenance and they also partner with the City of Ghent on the management side. Construction costs were 1,806,627.72 euros (excl. VAT), with Sport Flanders paying 698,368 euros.

The design is by the French architecture firm Constructo in collaboration with Brussels-based B-ILD. The main contractor is the firm Stadsbader from Harelbeke. The skating hurdles were made by Concrete Dreams.

Well-known skaters, free runners and BMX riders competed at a skate contest and showcase on the opening of the park on Saturday, 18 July. The event was live streamed on Facebook and YouTube, and was only accessible with prior reservation:

The opening day of Skatepark Blaarmeersen.

With 4,000 square metres, the largest skate park in Belgium is also the third-largest in Europe. What is impressive about the facility is that the Ghent urban sports community helped in the design and the elaboration of the concept, explains City Hall.

“The skaters have been asking for a park like this for 3 generations. We had to wait for a long time, but now we have really won the lottery”, Nick Steenbeke, one of Belgium’s top skaters, was quoted saying at the municipal website.