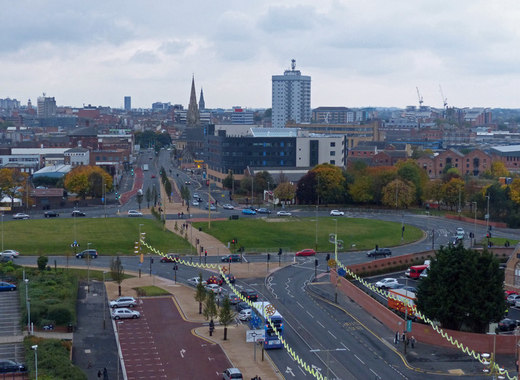 Leicester will become one of the first cities in the United Kingdom to study and monitor local air pollution caused by fine particulates – or PM2.5.

The new project is being launched following an earlier victory of the Leicester City Council, when the local government managed to secure 250,000 pounds in funding for a pilot project aimed at identifying the sources of such pollutants within the urban area.

But what are the PM2.5 and why are they considered such dangerous pollutants? They are microscopic particles of dust or smoke that constantly find their way into the air we all breathe. Prolonged and extreme exposure to said particles leads to serious health risks and a potential for the development of various respiratory diseases.

Currently, the United Kingdom lacks regulations concerning the amount of PM2.5 that is allowed in urban areas, but according to the World Health Organization, its annual levels should not exceed 10micrograms per cubic metre.

So far, the amount of air pollutants in the air of Leicester have been recorded in the background by an automatic monitoring site located at the University of Leicester. Yet the City Council wants to do way more.

The local government, alongside local air quality experts EarthSense, will be working on developing a large-scale city-wide approach to the monitoring of air in the city.

Cllr Adam Clarke, deputy city mayor and executive lead on environment and transportation, stated that “We are now recording the lowest levels of nitrogen dioxide we’ve ever seen and are taking action to reduce it further. But more needs to be done, particularly around understanding and managing the levels of PM2.5 in the city… We are determined to continue to accelerate the improvements we have seen in recent years and achieve our aim of Healthier Air for Leicester.”

To accomplish its goals, the City Council will make use of 11 of EarthSense’s air quality sensors. Six of them will be placed in the busiest areas of the city, one in its outskirts and the remaining four will be mounted on electric vehicles and will provide mobile data.

The results of the projects will be unveiled towards the end of 2020 and will be accompanied by an interactive map allowing for on-demand monitoring of air quality within Leicester, as well as a smartphone app.