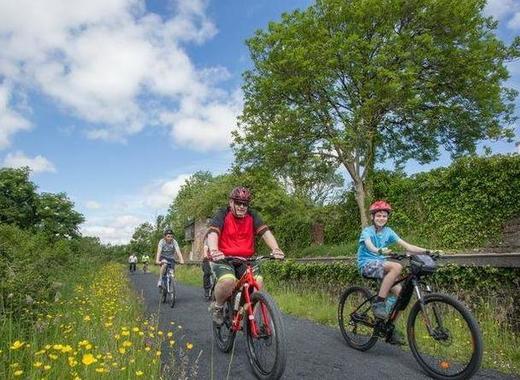 A total upgrade of the surface of Limerick’s Great Southern Greenway will begin in June following the adoption of a EUR 5 million investment programme for the road’s overhaul, Limerick City and County Council announced yesterday. The work is scheduled to take 12 months and on completion, the entire 40km route from Rathkeale to the Co. Kerry Border near Abbeyfeale will boast a 3-metre wide macadam surface.

Keeping abreast of the competition

Stretching along the old Great Southern rail line, the route connects the three market towns of Rathkeale, Newcastle West and Abbeyfeale and is one of the hidden tourist gems in the west of Ireland. The upgrade will raise the route’s standard, bringing it on par with the most popular greenways in the country including the award-winning one in Waterford. The project is being funded by Limerick City and County Council (EUR 3.4m) with EUR 1.6m additional support from the Rural Regeneration & Development Fund.

Apart from the EUR 5 million investment, other important steps associated with the Greenway have been taken. Limerick City and County Council has acquired the old Ardagh and Barnagh Station Houses and will begin shortly preservation work on these two railway heritage structures.

An 800m bypass around a working farmyard at Coolybrown, Ardagh will be built with the agreement of landowners, to ensure safe passage. Extensions to the Greenway with cycle routes to Askeaton, Foynes and Glin are also planned for the near future.

Speaking on the occasion, Michael Sheahan, Mayor of the City and County of Limerick said, quoted by the municipal website: “The Greenway passes through some of the most beautiful scenery in County Limerick and this investment will allow us to showcase it in the best possible way. We have the potential to have one of the best Greenways in the country in Limerick and this latest investment is helping to achieve that. We also look forward to working with our friends in Kerry once the Greenway extends to Listowel.”