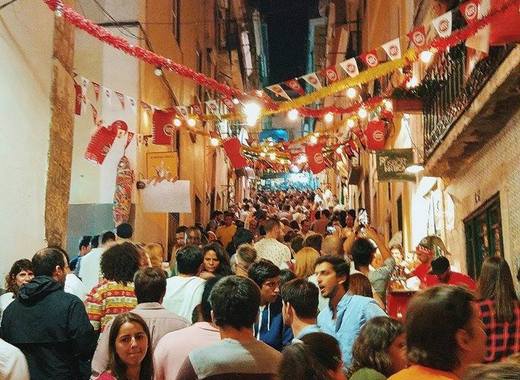 On the eve of Saint Anthony day, June 12, Lisbon turns into one big party. In June, all the streets in the historic areas are colorfully decorated with garlands and lights. Each district of Lisbon competes to be the best-decorated or have the best choreographed set of dancers, as they perform to judges on the parade down the Avenida da Liberdade. The parade is lead by the by the Saint Anthony couples, who were married earlier that day. In Portugal, Saint Anthony has been known as matchmaker – a patron saint for singles. That’s why on this day there are organized mass marriages. The “Santo António weddings” are organized by Lisbon council and offer the city’s most economically-disadvantaged young couples the opportunity of fulfilling their dreams of tying the knot in a mass ceremony. Another way to show love and affection is to present a little pot of basil that contains a romantic love poem wishing luck and happiness to the loved one person.

The entire population of Lisbon, and most of its surrounding suburbs, not to mention the thousands of tourists, flock downtown filling the streets with music, dancing and plenty of food and drink.  Street food stalls appear on every corner. And the most typical dish this day is the grilled sardine. According to the Portuguese Público newspaper, the Portuguese consume about 13 sardines per second during the Festas de Lisboa – Lisbon Festivals in June, where festivals associated with the fish occur throughout the country. Long tables of street vendors sell beer and sangria for everyone to enjoy. And not just street vendors, but also local residents open up their street-facing windows to do it, too!