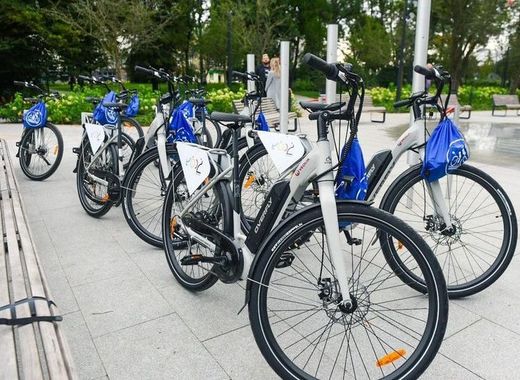 The city of Lodz has kickstarted yet another green initiative: officials from two municipal departments will inspect local projects on electric bikes. The newly introduced electromobility alternative concerns the Greenery and the Road and Transport Boards and fits into a broader strategy for sustainable urban development adopted by the third-largest Polish city.

As part of the latest green initiative in Lodz, officials of two departments will switch to electric mobility to perform their duties. A total of 10 e-bikes were delivered to the City Greenery Board, and to the Road and Transport Board which will be used to inspect investment projects, the conditions of bicycle lanes or the order in parks.

The bikes were provided for a period of one year by Veolia Energia as part of their joint cooperation in the development of electromobility between the energy company and the municipal authorities. Should the initiative be considered successful, it might be expanded to other departments.

Officials at two municipal departments in Lodz will switch from cars to electric bikes to perform their duties. Photo: Paweł Łacheta / UMŁ

Lodz has had its eyes on developing electromobility for a while now. As Maciej Riemer, director of the Department of Ecology and Climate explains, the city was the first in Poland to allow for e-vehicles to also use bus lanes. Not only that but Lodz is also currently building 150 publicly accessible charging points for electric cars and is in the process of buying 17 electric buses.

Furthermore, on 7 September, Łódź signed a letter of intent with the Polish Alternative Fuels Association for joint activities promoting the development of electric transport. Thanks to this, Riemer hopes, Lodz it will become a kind of "laboratory" for the development of new mobility.

What is more, these collaborations fit perfectly in the Ecological pact that Lodz adopted in January. The mission of the strategic document is to turn Łódź into a “city of greenery, with clean air, free of smog and plastic”. The e-bikes are thus believed to contribute to mitigating the environmental challenges contained in the document.