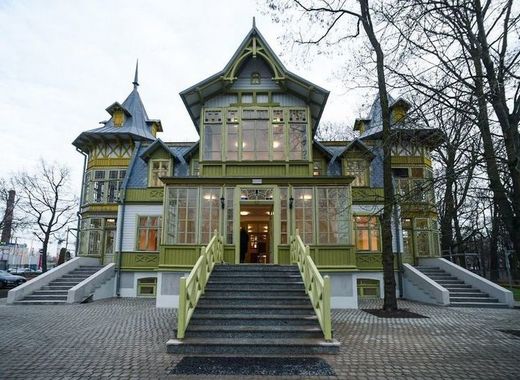 One of the most iconic places for architecture lovers in Lodz is undergoing a major renovation with the help of the European Union. The famous Museum of Wooden Architecture featured in the American horror film "House" (directed by Robby Henson, 2007) and the Polish film "Spanish" (directed by Łukasz Borczyk, 2014) is set to reopen with a permanent exhibition on textiles in the second half of 2020, announced the city of Lodz.

Modernization of the premises with EU funding

The renovation project is co-funded by the European Regional Development Fund. The Wooden Architecture Museum is being refurbished by a company with over 25 years of experience that specializes in the conservation of historic buildings. Works include, among others, cleaning of wooden elements, thermal insulation and installation of internal central heating and ventilation. This will guarantee better heat recovery and reduced energy loss. Installed air conditioning/ventilation will facilitate the use of the site during the summer heat and will maintain a constant temperature inside the premises. The building has also been adapted to the needs of people with disabilities as it features an internal elevator.

A rare example of wooden architecture

The museum is unique in the region, and there are just a few examples of similar architecture on a national scale. The villa on Scaleniowa Street in Ruda Pabianicka has several decades of history surrounded in mystery. Archival documents reveal that in the 1930s the villa was property of local manufacturer Szaja Światłowski, who was a shareholder of the Łódź Wool Products Factory Światłowski, Kon and Brener. He bought the house in Ruda Pabianicka as a gift for his wife Klara.

Up until 1830 almost the entire building was made of wood. Nowadays the site presents examples of architecture of this time, including a summer villa, a house, a wooden tram stop and a church.