Longest green roof on a residential building in the Netherlands completed

The complex of Peperklip in Rotterdam is becoming a future-proof home to 1,300 people 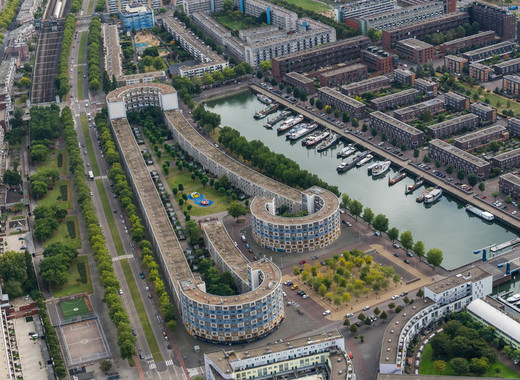 The largest social housing complex in Rotterdam-Zuid has just taken yet another step towards climate resilience. The iconic Peperklip now has the longest natural roof amongst all residential buildings in the Netherlands, reported the municipality of Rotterdam earlier this week. The 7,600 square meters of greenery which will grow on the roof shall contribute to the biodiversity in the city and retain water during periods of heavy rainfall.

Making our cities climate-resilient together

The green roof of Peperklip is a collaboration between the municipality and the Vestia housing association and is funded under the LIFE @ Urban Roofs project for climate action, subsidised by the EU. The roof is now given time to grow into full but once this happens there will be space for bees, butterflies and birds. The project is thus believed to contribute to the city’s ambition to become resilient to climate change.

The residential complex rents a total of 549 properties and hosts about 1,300 people. It is currently undergoing a major overhaul by Vestia, which includes maintenance and improved insulation.

Although the roof will not be accessible to the residents of the complex, it will serve them in other ways. For example, it will help regulate the building’s temperature, by cooling it in the hot summer days and insulating the indoor climate in winter. The plants on the roof will also retain water for longer, which helps prevent flooding during heavy rain.

See how it works in the video below (in Dutch):

The residential building Peperklip op Zuid in Rotterdam will soon have 7,600 square metres of greenery on its roof. Video by Municipality of Rotterdam

Alderman Bert Wijbenga, quoted by the municipal website, explained that the port city wants to create an additional 20 hectares of greenery in the city over the coming years. The green roof of Peperklip thus serves as a good example of the opportunities that roofs offer to expand greenery in urban areas, where space is scarce and which are bound to face increasing climate-resilience challenges.

Instead of being relegated as unused spaces, green roofs can combine multiple functions, such as generating sustainable energy with solar panels and social functions, such as a terrace or playground, water storage and biodiversity.

The sustainable transformation of the residential complex Peperklip goes far beyond a green roof, however. Designed by architect Carlos Weeber in the shape of an opened-out paperclip, the complex invites its inhabitants of all ages to invest themselves into the green transformation of the building.

Peperklip shows that there is a space for greenery even in built-up areas. Photo by Resilient Rotterdam

Children are encouraged to paint their views on nature and sustainability on its murals, residents who have previously struggled to find work are now working on Peperklip’s maintenance team. Energy coaches will also be available to help residents change their behaviours to make savings.

Initiatives like Peperklip serve as a good example that even in complex urban environments it is possible to design climate-resilient spaces, with smart and inclusive approaches.