The total cost of investment is 90 million PLN 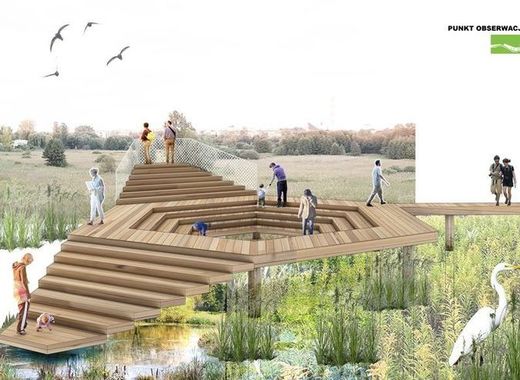 A new riverside park will soon see the light of day in Lublin, one of the largest cities in Poland. Local authorities presented a detailed development concept for the recreational space sprawling a total of 70-hectares, which includes beaches, the transformed ruins of a mill with a stage and amphitheatre, walking and cycling paths as well as places for active leisure. They all are expected to allow Nadrzeczny Park to fit naturally into the character of the Bystrzyca River valley.

Smooth transition to a natural setting

The primary role in the park’s concept design was its location, hence the focus was placed on natural construction and finishing materials. However, it was also particularly important to have the park be well connected with the existing pedestrian and bicycle network of Lublin. 7.5 km pedestrian walking paths with a mineral surface and 7.5 km with asphalt surface for cyclists have been designed along the entire length of the Park. On both sides of the river, recreational paths will be created for walkers and runners, with platforms for anglers and canoeists. Along the western edge of the park, there will be a path with separate lanes for cyclists and pedestrians.

A multi-level footbridgewith the function of an observation deck. Photo: Krzysztof Żuk

The ruins of the former mill preserved on the eastern bank of Bystrzyca will be used to place a stage with an amphitheatre integrated into the natural slope. It will be a space for cultural events and a tourist attraction. Two grassy beaches (on the west and east of Bystrzyca) with existing natural meadow greenery contribute to the recreational areas. On the west side, the meadow will border an amphitheatre and a water playground. There will also be a volleyball court, arcade playgrounds and wooden, recreational architectural elements.

The Mayor of Lublin, quoted by Lublin.eu, expressed his approval of the concept of the park and defined it as a well-planned space of rest, relaxation and sport. He explained that “linking the valley with the city will increase its ecological values as part of the implementation of urban plans for climate change adaptation, and at the same time will provide residents with the opportunity to relax without having to leave the city”.

The total cost of construction of the Nadrzeczny Park is estimated to exceed 90 million PLN and will be made in several stages.