It sets up new rules, effective from this Friday 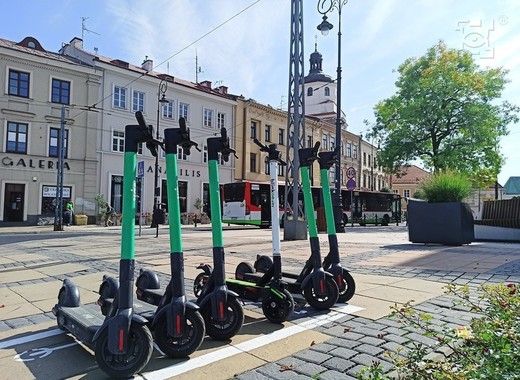 Lublin just became the first city in Poland to sign agreements with local scooter operators BOLT and blinkee.city on the proper parking and safe use of these devices. This was announced by the city authorities on Monday, 16 November, and is considered an important step towards organizing the use of personal transport in Lublin in the public space.

The agreements introduce new rules and regulations which will enter in force as early as this Friday.

Regulating micro-mobility at the local level

“The agreement signed today formalises cooperation for the development of micro-mobility in Lublin. Due to the lack of regulations in the field of scooters at the statutory level and a clear definition of their place on the road, we are making such attempts on a local basis.

The purpose of the agreement is to organize the way of using scooters, which will enable the safe use of common public spaces for all road users” said Artur Szymczyk, Deputy Mayor of Lublin City for Investments and Development.

The agreement is one of several series of steps towards resolving the problem with parking or, more precisely, leaving the scooters in a disordered manner. This summer, the city designated a total of 20 parking lots for these devices. Now, it introduces new steps setting specific areas where speed limits will apply and where parking of such scooters will be prohibited.

Thus, based on the agreement, a speed limit of 12 kilometres per hour is introduced at Krakowskie Przedmieście street (between Lipowa and Królewska streets), Litewski Square, Saski Garden and the Old Town. This speed is considered the minimum at which scooter users can safely balance on electric scooter and pass near pedestrians.

When it comes to the areas where scooters cannot be parked, these are the Saski Garden, at Litewski Square, Krakowskie Przedmieście street (on the section between Kapucyńska and Królewska streets) and in the Old Town from 1 May until  31 October. The ban on parking in the indicated locations does not apply to places where bicycle stands had been installed.

To make sure their users adhere to the new rules, scooter operators will arrange the settings of the applications so that they do not allow driving at higher speed within the indicated sectors. Furthermore, in the parking-prohibited areas, scooter apps will not allow selecting the option of returning the device. This means that the user’s credit card will be charged until they take the scooter outside of these areas.

The two scooter operators have already firmly set foot in Poland and similar regulation on a local level is likely to follow in other cities. BOLT is already operating in almost 30 Polish cities, while the Polish blinkee.city has grown to 35 since its first installation in Warsaw in 2017.