The 5.5 km long line extends between Lund Central Station and the Science Village of ESS 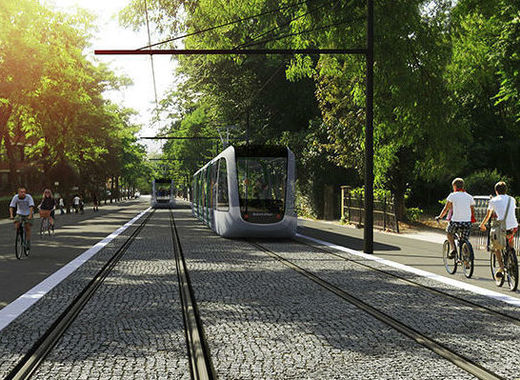 The construction of the tram line in Lund, Sweden, about which TheMayor.EU wrote earlier this year, is now over after three years of hard work, Lund Municipality announced. Last week the tramway facility, which extends between Lund Central Station and the ESS research facility in Brunnshög, was approved at a final inspection meeting and handed over to Lund Municipality and operator Infranord.

The new line features double tracks, new pedestrian and cycle paths and new lanes in some places. The contractor Skanska who built the tramway will return to Lund for some remaining adjustments in the spring of 2020 when the new trams are expected to arrive. The seven 33-metre-long bidirectional trams will have low floors and ample space for wheelchairs and pushchairs to accommodate passengers with reduced mobility.

The construction of the 5.5-km-long tram line started in the early spring of 2017. Along the way workers stumbled upon some archaeological finds which were excavated and taken care of by archaeologists.

Sustainability has been one of the key words for this  project. For example, almost all the soil used for the construction is recycled soil. Six kilometers of granite curbs and 10,000 square meters of pebbles have also been recycled.

The area around the tracks has also become greener, as 300 trees have been planted and 40,000 square meters of grass have been rolled out, which is about the size of seven football fields.

“We know that the construction activities have been nerve-straining for many people and we really want to thank everyone for the patience,” said Pernilla von Strokirch, Lund Municipality's project manager. “The tramway is an important backbone of the sustainable urban development in the area and many construction projects are already underway along the line. The fact that the tram is now in place means that those who move here will be able to have public transport as a natural choice right from the start.”

The estimated investment for the project is Skr776m (74m euro), part of which is jointly funded by the Municipality of Lund and the Swedish Government. The Finnish Transport Agency has granted a Skr298m loan to the city council.