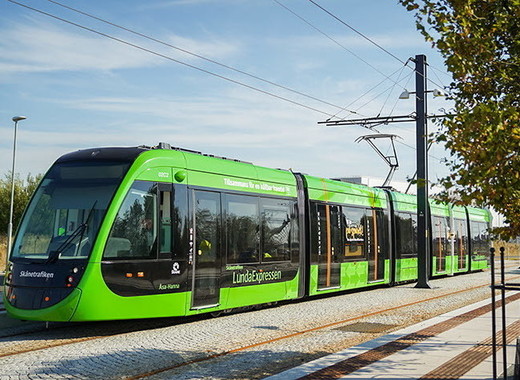 After three years of hard construction work, Lund’s first tramway will start rolling on 13 December. But due to tightened Covid-19 restrictions in Sweden, including an 8 person limit on public gatherings, Lund Municipality has decided to hold the 12 December inauguration of the long-anticipated service remotely. Instead of the planned folk festival, the entire inauguration programme will be recorded in advance and broadcast digitally on the opening day.

“Given the spread of infection and current restrictions, it is natural that the formal inauguration will be converted to a digital format and that the public's one day free ride will be  postponed to the future. However, the tramway will open to regular traffic on 13 December according to plan and a group that will probably use it are our superheroes who work at the hospital,” says Mayor Philip Sandberg, quoted by the municipal website.

The inauguration programme will consist of pre-recorded interviews with people who have played an important part in the tram's creation. It will be broadcast via the digital channels of Lund Municipality and Skånetrafiken and will be available for subsequent viewing at www.lund.se.

Built by Skanska, the 5,5km-long line extends between Lund Central Station and the ESS research facility in the new district of Brunnshög. The line features double tracks, new pedestrian and cycle paths and new lanes in some places.

About 60 percent of all workplaces in Lund are located along the route of the tram, making the use of this sustainable public transport option a natural choice for many residents. The seven 33-metre-long bidirectional trams have low floors and ample space for wheelchairs and pushchairs to accommodate passengers with reduced mobility.

As TheMayor.EU informed last year, Lund’s tramway project has been realized with special attention to sustainability and preservation of the environment. Almost all of the soil used for the construction of the line has been recycled, as well as six km of granite curbs and 10,000 square m of pebbles. In the area around the tracks 300 trees have been planted and 40,000 square m of grass have been rolled out, enough to cover seven football fields.

The project, worth some Skr776m (EUR 74m), has been jointly funded by the Municipality of Lund and the Swedish Government.