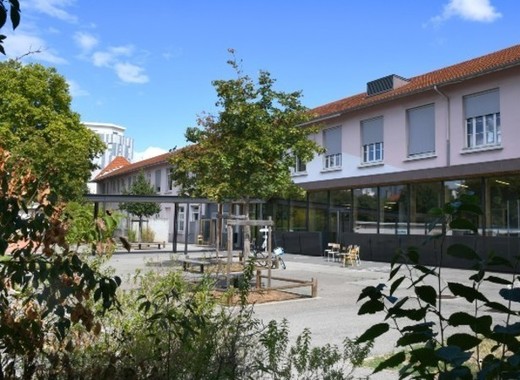 More greenery and less asphalt at school playgrounds in Lyon – this is the objective set by the new governmental team for the 2020-2026 term. In addition, this week pupils at 12 schools have enjoyed a more calm, clean and safe return to school, thanks to the pedestrianisation around their school buildings.

Bringing nature to the schoolyard

According to the local government of Lyon's concept, led by Grégory DOUCET (The ecologists), schoolyards should contribute to the well-being of children, allow them to practice activities free from gender discrimination and to have access to nature in the city. That is why, as announced earlier this week by Métropole de Lyon, they are working on a greening plan for schoolyards for the 2020-2026 mandate.

The plan has 4 objectives:

Gradually the plan should be applied to all 206 schools in the third-largest French city, but for the time being, the focus is on a list of 20 establishments only. Their courts are in poor condition and have acute heat problems which is why the feasibility study for the new plan will first focus on them.

Lyon adapts to the needs of children

On top of greenery, pupils in Lyon are set to enjoy better air quality and lower noise levels, as well as safer entrance and exit from school premises – at least this is what the efforts of local authorities over the course of the summer have intended to do. Urgent works turned the surroundings of 12 schools into pedestrian areas.

The move is aimed at calming the city, reclaiming public space and responding to long-term environmental and climate challenges, reads the website of Lyon. The city must also adapt to the habits and lives of children and allow them to move around safely. Hence, securing the surroundings of the remaining schools is expected to take place soon, as well as setting up meeting areas limited to 20 km / h, which aid children in learning how to drive a bicycle and a scooter.