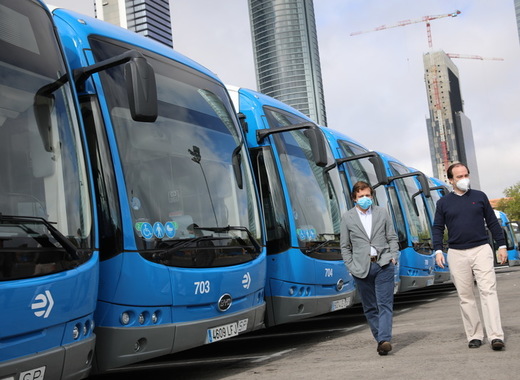 Madrid moves one step closer towards sustainable mobility. As the city council reported on Wednesday, they have purchased another 15 new electric buses that are to be incorporated into the Municipal Transport Company's (EMT) fleet. The new acquisition brings the total number of electric vehicles in the urban transport operator's fleet to 82.

The Mayor of Madrid José Luis Martínez-Almeida was one of the first to see the new zero-emissions buses which will soon cross the streets of the capital. Photo: Madrid City Council

The mayor of the Spanish capital José Luis Martínez-Almeida, together with Borja Carabante, councillor delegate for the Environment and Mobility, visited on the morning of 13 May the Fuencarral operations centre of the Municipal Transport Company. There they were acquainted with the characteristics of the new vehicles.

This latest order for electric buses consists of 15 standard 12-meter vehicles that are yet to be subjected to testing, as per the standard procedure. Once testing is complete, the buses will begin circulating on the new line that will soon begin to operate as part of the Madrid 360 Environmental Sustainability Strategy, as well as on line 52 that connects Puerta del Sol with Santamarca, in the Chamartín district, informed the municipality.

The BYD K9UB model runs on two motors of 150 kW each that are powered by two lithium ferrophosphate battery packs. At full charge, they last for four hours, giving the e-vehicle a range that can exceed 300 kilometres depending on the driving cycle and weather conditions. This would be the equivalent of more than 20 hours of circulation in the usual dense traffic conditions of Madrid.

Although electric mobility is not something new to the Spanish capital's urban transport, this is the first time that the Chinese high-tech company BYD supplies them with new vehicles. The company, explain local officials, has an established position as a provider of emissions-free buses in Europe.