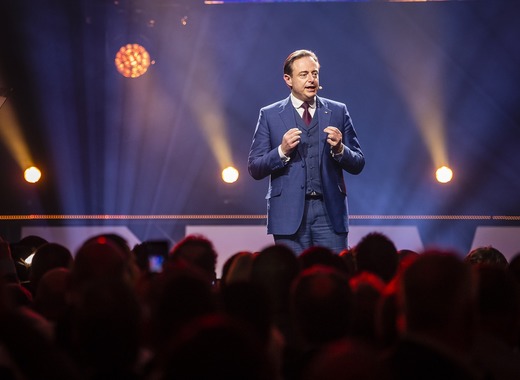 Bart de Wever, the mayor of Antwerp and leader of the rightwing N-VA is widely considered Belgium’s most powerful politician – but if it were up to him, there would be no Belgium at all.

Who is Bart de Wever?

In 2004 Bart de Wever took over the chairmanship of the rightwing conservative N-VA or New Flemish Alliance – a fairly young party that grew from the remnants of the old People’s Union that had split just three years prior.

By the time de Wever took control of the party, it had failed to make any significant headway – struggling at both the federal, regional and local level in Flanders and Belgium. Only after entering a coalition agreement with the Christian Democratic and Flemish party did they manage to enter the corridors of power. Geert Bourgeois, the then leader of the N-VA became a minister in the regional government which allowed de Wever to take the reins of power within the party.

With Bart de Wever at the helm, the party quickly began gaining traction. Just a few years after he took over the post, he was elected mayor of Antwerp in 2007 and in 2009 the N-VA managed to secure a shocking 13% of the vote entirely by itself.

Instead of entering the regional government as a minister, de Wever instead chose to remain party leader. This allowed him to transform the party in his vision and turn it into the only mainstream alternative for citizens of Flanders seeking independence for Belgium. The party has grown in power ever since and is currently the biggest party not only in the northern part of the country but in the entirety of Belgium as well.

Migration, security, benefits and separatism – a recipe for success

In recent years the topics of security and migration have been the centrepiece of European politics. The case is no different on a local and regional level with de Wever’s pitch focusing precisely on those issues.

Following the migration crisis, de Wever’s messaging campaign has become even more recognizable and acceptable for citizens of Antwerp and Flanders overall. Combined with a strong focus on social benefits, such proposals are always bound to attract voters.

But what’s even more interesting about the N-VA under de Wever is that a party that has the issue of separatism at its very core has managed to transform its image into something that is acceptable to more and more people across Flanders. The combination of mainstream rightwing rhetoric, social benefits and promises of the eventual dissolution of Belgium has created the perfect storm that has allowed the New Flemish Alliance to thrive and achieve unparalleled success.

There is an undeniable elegance to the simplicity of de Wever’s approach – which is why it has proven to be so successful – not only in securing the N-VA’s victories but also in allowing him to win term after term as mayor of Antwerp.

And here is the formula - By presenting migration and social security as incompatible, he has managed to shift the blame for current and future failures and rollbacks of the welfare states onto the shoulders of migrants.

At the same time, the arrival of migrants can only be stopped if the Belgian federal government decides to do something about it – but it won’t. Why? Because those pesky Wallonians will never consent to it. So what’s the solution? The eventual independence of Flanders, allowing it to take control of its borders, limit migration and provide for the social safety of its residents.

Upon consideration, the same line of thinking was also used during the Brexit referendum campaign and the years after – yet Bart de Wever was far ahead of the curve.

Yet with success comes responsibility. For Belgium to get a federal government any proposed setup must meet a wide range of complex requirements – concerning regional parity etc. That is why pretty much all federally-represented parties have come to terms with the fact that they will have to back down from some of their more radical proposals that they have championed throughout the election campaign.

In 2014 de Wever was forced to do precisely that. Despite the N-VA securing the largest number of votes in Flanders and in Belgium as a whole, he was forced to back down from his Prime Ministerial ambitions and to water down his prior platform in favour of finding common ground with other parties on topics like the economy.

And so, despite the N-VA holding the most seats in the Belgian Parliament, they were forced to support a Prime Minister from another party – namely Charles Michel, the current head of the European Council.  This, albeit responsible and reasonable move, led to significant discontent among the voters of the N-VA.

Bart de Wever’s approach to statesmanship had put him at odds with the most radical parts of Flemish society – those who are in favour of rapid dissolution of Belgium and a hardline approach to migration and security.

In the 2019 federal election this spectre of the “even further right” came to haunt the traditional far-right in Flanders. The VB – of Vlaams Belang, Flemish Interest, skyrocketed in popularity, turning it into the 2nd most popular party in all of Belgium. Its campaign was focused pretty much on the same things as the positions held by the N-VA – except that unlike de Wever, the VB are advocating for far more radical solutions.

You might have noticed that Belgium still has no federal government, negotiations are still ongoing with no end in sight. Yet, with the N-VA still firmly holding the first place in terms of popularity and seats in parliament, the future of Belgium lies squarely in the hands of the mayor of Antwerp – a man who does not even want the country to exist.