From simple farmer to mayor of a commune that no longer exists, to chairman of Europe’s largest political family – Joseph Daul has been one of the continent’s most influential politicians 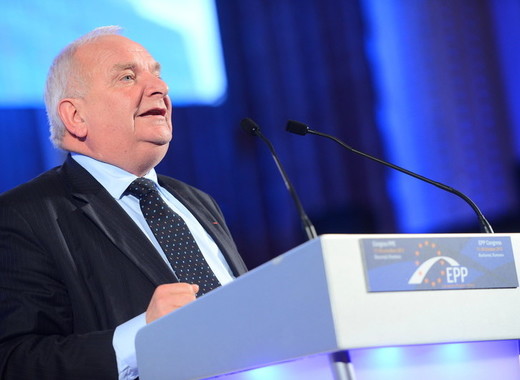 After taking a brief respite for a couple of months, our Major Mayors series is finally making its triumphant return. But who are Europe's Major Mayors?

Thanks to their proximity to citizens, Mayors often bask in unrivalled democratic legitimacy. While some are perfectly content with serving their constituents on the local level for many years, others use their popularity to propel themselves onto the national and international stage and send ripples across the whole world. Such is the case of Joseph Daul, the former mayor of Pfettisheim who rose through the ranks to become chair of the European People’s Party.

Who is Joseph Daul?

Joseph Daul was born in 1947 in Strasbourg and to say that Europe is in his blood would be a vast understatement. He got involved in politics at a very early stage in his life after he took over his family’s beef and sugar beet farm. This pushed him into the exciting life of an agricultural trade unionist at the National Center for Young Farmers (or the CNJA - Centre National des Jeunes Agriculteurs). Once there, he quickly rose through the ranks until he was appointed vice-president, responsible for European Affairs.

His career as a farmer and unionist eventually pushed him towards local politics. He was elected mayor of the small commune of Pfettisheim in the region of Alsace, near the German-French border. He was so successful in the role, that he served in the position until 2001, despite being asked by president Jacques Chirac to run for the European Parliament in 1999.

He quickly rose through the ranks of the centre-right EPP, chairing both the parliamentary group and the Committee for Agriculture and Rural Development in the European Parliament. Daul reached a peak in his political career once he was elected chairman of the European People’s Party in 2014, following the death of its former leader Wilfried Martens. Under his leadership, the EPP kept on growing and expanding its influence reach, until progress was forced to a screeching halt at the 2019 European Elections when the party suffered its first major setback.

As if being born in Strasbourg, one of the European Union’s most important administrative centres wasn’t enough to instil the European DNA in Joseph Daul, his early life in Alsace might have finished the job.

The Commune of Pfettisheim has a population of around 800 people. It’s so small, that it no longer exists, having been incorporated into the larger municipality of Truchtersheim in 2016. Nonetheless, the work and the life Joseph Daul led in his small town were vital for his formative years, giving him a different view of life in Europe – not only as a citizen but as a politician as well.

On the one hand, being mayor of a town with the size of Pfettisheim developed in Daul the skillset most coveted among politicians – the ability to talk to people, to one’s constituents, to understand their concerns and to give them the right answers – and finally to deliver in such a way that they remain satisfied. Judging by his three consecutive successful bids for the post, Joseph Daul was pretty good at all those things.

One the other hand, growing up near the Franco-German border, in a region that had been the subject of intense rivalry between the two countries for centuries breeds a different kind of worldview – one of dialogue, compromise, and cooperation, rather than confrontation and escalating tensions.

Joseph Daul’s years as mayor of Pfettisheim were not only important for pushing him onto the path of politics – they also helped him develop the skills that would later make him one of the most powerful men in the whole of Europe.

His work as a farmer and unionist and his work in local politics in Alsace have led Joseph Daul to embrace a more practical and pragmatic approach to doing politics. Radically different, from the traditional establishment politicians, Daul has not been particularly concerned with ideologies and grand utopian ideas. Instead, he prefers action and concrete ideas on how to achieve specific goals.

This approach has earned him not only international admiration but also the sympathies of members of other parties – outside the EPP. Not only was he close with French Presidents, but he also has the ear of German Chancellor Angela Merkel, with many believing him to be one of her closest allies and confidants.

Joseph Daul’s ambition for the EPP once he became chairman was simple – to keep the party the biggest and strongest in the European Parliament and to secure as many leading positions for its members as possible. It was he who was one of the chief architects of the old Spitzenkandidat process, which secured Jean-Claude Juncker the seat of President of the European Commission.

Daul’s friendly ties with the Socialists and Democrats and more specifically with their own Spitzenkandidat Martin Schulz and his efforts in keeping the EPP as large as possible, allowed for the process to reach a satisfying conclusion, without EU28 leaders resorting to backroom deals and late-night summits.

This success was not meant to last, however. In 2019 the pragmatic big tent approach of Joseph Daul drew the ire of many voters and fellow politicians and prevented the EPP from maintaining its dominance, at times even isolating the party in European institutions.

A problem of Hungarian proportions

Joseph Daul’s approach to attracting and incorporating as many parties as possible within the EPP served the general purpose of maintaining the group’s dominance. His disregard for ideological purity and integrity appeared pragmatic when it delivered results and less so once the problems started to arise.

The main headache that Daul has been dealing with for the last year of his chairmanship of the EPP is called Viktor Orban and his party Fidesz. The EPP’s response to the Hungarian government’s actions against foreign NGOs, the country’s judicial system and its many other transgressions was not only slow but also almost nonexistent. Daul failed to formulate a concrete approach to the problem presented by Viktor Orban who had been dismantling democratic institutions within his country and touting the exploits of the so-called “illiberal democracies”.

This failure led to a few mini civil wars within the EPP – the most notable of which were the vote in the European Parliament on starting an Article 7 procedure against Hungary for breaching EU values and the vote on whether the EPP should suspend Fidesz’s membership of the group. The failure of the party to reach a consensus on the issue allowed the socialists, the liberals and the greens to score some very easy points during the election campaign in 2019, undoubtedly depriving the EPP of some of its support.

Yet where Joseph Daul refused to take a hard line against the transgressions of Viktor Orban, his successor has vowed to do precisely the opposite. Donald Tusk who took over the chairmanship of the EPP on 20 November 2019 has made clear on many occasions his disdain for those who seek to dismantle their own countries’ democratic institutions.

Joseph Daul, the cattle and sugar beet farmer, the mayor of a small village and now the former chair of Europe’s largest political family will now slowly begin seeping into the pages of European political history. And while the past year might have been a bit more exciting than he would have liked, his achievements and successes speak for themselves.