An ex-bookshop owner and failed football star, the former mayor of Würselen grew to become one of Europe’s most recognizable and influential politicians 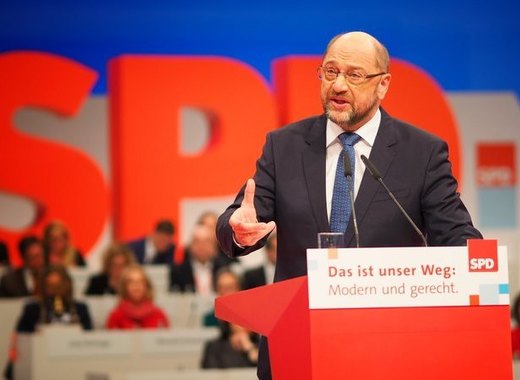 Source: Martin Schulz by SPD Schleswig-Holstein on Flickr (CC BY 2.0)

The story of Martin Schulz is one of inspiration and success, one of overcoming great personal challenges and coming up ahead. And despite his most recent failures, the former mayor of Würselen remains among the continent’s most influential politicians. So, get ready to meet this week’s Major Mayor.

Who is Martin Schulz?

Much like Joseph Daul, Martin Schulz was instilled with the European spirit from his very birth. Coming from the village of Hehlrath, situated right at the German-Dutch and German-Belgian borders, Schulz’s family tree branched into all neighbouring countries. In a sense, his parents were also the embodiment of post-war European and German politics – a father hailing from a social democratic family and a mother who was an activist in the centre-right Christian Democratic Union made up a Grand Coalition (GroKo) of their very own.

Martin Schulz’s journey into politics is very much unlike that of other, more traditional politicians. Not only did he never manage to graduate high school, failing the 11th grade twice, but he also had some very different ambitions in his life. He wanted to become a professional football player, while simultaneously studying the craft of bookselling.

An injury to the knee stopped Schulz from ever achieving his dream of playing professionally, as a result of which he also suffered from a period of alcoholism, culminating with a suicide attempt in 1980. Yet he managed to overcome his demons and after successfully getting out of rehab, he opened his very own bookshop in the town of Würselen.

In 1984, 10 years after first joining the youth wing of the German Social Democratic Party (SPD), Martin Schulz was first elected to the municipal council of Würselen – just a few short years later he became the youngest mayor in the whole of North Rhine-Westphalia. He served as mayor until 1998 when he gave up the position to commit himself fully to his duties as an MEP.

Schulz served in the European Parliament between 1994 and 2017. During that time, he filled the roles of leader of Socialists and Democrats, president of the EP and was one of the leading figures in the creation of the so-called Spitzenkandidat process, becoming his party’s own lead candidate.

Martin Schulz returned to German national politics in 2017 and was elected chairman of the SPD. He led the party to its worst result at a national election in its entire post-war history. Yet despite that failure, his influence can still be felt across the continent.

In the European Parliament, Martin Schulz found his true calling. After serving as mayor of the town of Würselen, the up-and-coming politician was ready for bigger and greater challenges. Yet it was precisely his years in local politics that gave him the leg up during his transition onto the continental battlefield. In 1980s he worked tirelessly on the twinning of Würselen with the French town of Morlaix – whose mayor at the time was Marylise Lebranchu, who soon after would also leave municipal politics and go on to become Minister of Justice of France and later Minister of Public Services.

Martin Schulz’s aptitude for communicating with people coming from different backgrounds, harbouring different ideas and inevitably pursuing different goals was one of the pillars on which he stood during his decades serving as a Member of the European Parliament.

The ability not only to compromise but to actually develop friendships with your political opponents is a rare and curious sight. Yet the relationship between Martin Schulz and Jean Claude Juncker paved the way for the creation of the so-called Spitzenkandidat process.

In the prelude to the 2014 European Elections the two had come to an agreement – one possible only with absolute trust – that the party that wins the most votes across the continent will get the post of President of the European Commission, while the other candidate would withdraw his name from the competition – thus leaving the European Council without an alternative. And that is precisely what happened – Juncker’s presidency became inevitable once Martin Schulz endorsed him and opted for the position of President of the European Parliament.

It was precisely this relationship that kept the European institutions stable during the first couple of years following the 2014 elections. Thanks to said stability, Europe managed to regain its footing after being shaken to its very core by numerous crises in the years before.

Yet it was not meant to last. In 2017, Martin Schulz announced that he would be resigning from the European Parliament and will be heading back home – to Germany, where he would seek to challenge the dominance of Angela Merkel. His departure – and most importantly his very absence at the side of Juncker, left a gaping hole in the European Parliament and led to the Social Democrats withdrawing from their coalition agreement with the EPP. The glue that had kept them together for the past couple of years was now gone.

Upon his return to Germany, Martin Schulz was hailed as a saviour – not only by his own party but by much of the population as well. He was quickly granted the post of chairman of the party and directly went into campaign mode, aiming to dethrone Angela Merkel.

And at first, it was looking more than promising. His popularity was through the roof – after years of GroKo governments, Germans were tired of the national political establishment. Martin Schulz was the first breath of fresh air in years – untainted by domestic issues, barraging citizens with his wholesome backstory and European Dream. Support for the SPD skyrocketed, membership was rising, and polls were even giving the party a slight lead over the conservatives.

And just as quickly as it had begun, it came to a screeching halt. On the surface, the campaign led by the former mayor was a fantastic attention-grabber, yet with unemployment consistently falling and with homosexuals given the right to marry in the months prior to the election, lambasting the country’s problems with inequality proved ineffective. All attempts by Schulz to fight Angela Merkel were deftly avoided by the Chancellor who was able to shrug away any and all attacks by the social democrats.

The campaign quickly lost steam – and in the end, the SPD secured barely 20.5% of the vote – its worst result (yet) in post-war German history.

In the weeks ahead it all came crashing down for Martin Schulz. He had initially stated that under no circumstances would he let the SPD enter another Grand Coalition with the CDU and he would never accept a post in government – only for him to go back on both his pledges. After the CDU failed to convince the Greens and the Liberals to form a coalition government, the social democrats were forced to react in order to prevent snap elections, thus breaking one of Schulz’s promises. Soon after he expressed his interest in becoming the country’s foreign minister – breaking the second one.

Having lost the confidence of his party, his voters and his peers, Martin Schulz was forced to resign from his party leadership position and renounce all claims from positions in the future GroKo government.

Yet his story was not yet done. Over his many years of political service, Martin Schulz developed many close and personal friendships with politicians from around the country. His charm and renown make him one of Germany’s most important assets.

His latest venture into European politics was at the behest of his former rival – Angela Merkel, with whom he crafted one of the most intricate proposals aimed at breaking the institutional deadlock in the aftermath of the 2019 elections. Martin Schulz’s interpersonal skills had allowed him to weave a web of contacts that almost secured the top job of President of the European Commission for Socialist Spitzenkandidat Frans Timmermans. It was only through the efforts (or lack thereof) of another German member of the European Parliament – Manfred Weber and disgruntled national leaders from the EPP, that the entire plot fell apart and spelt out the end of the Spitzenkandidat process that Schulz and Juncker had carefully designed a few years earlier.

Through a combination of personal charm, professionalism and determination Martin Schulz, the former mayor Würselen managed to rise through the ranks of the political establishment and achieved much more than one would expect from a high school dropout. And as most recent events have proven, despite stumbles, it is too early to count him out.