Matteo Renzi, the former mayor of Florence and former Italian Prime Minister is once again at the very heart of political life 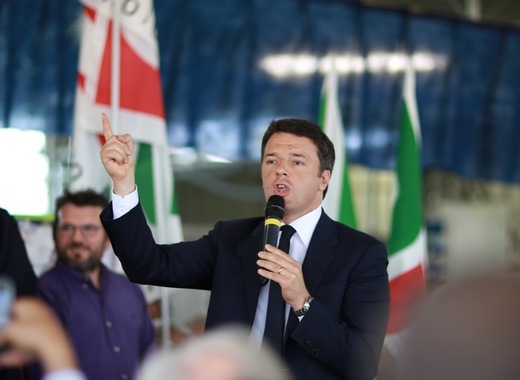 Who is Matteo Renzi?

Matteo Renzi is without a doubt one of the most successful politicians in Italy’s recent history. His Machiavellian approach to politics, however, has left him both isolated from his peers and deeply unpopular in the country amongst ordinary people. Up until very recently everyone thought that the time of Renzi is over, that he had passed his zenith and will remain in the sidelines until he fades into political obscurity. Such expectations proved to be overblown.

Renzi first reached national prominence when he was elected President of the Province of Florence in 2004 on the centre-left coalition’s ticket, becoming the youngest person ever to hold such a position. During his tenure he claims to have slashed the local government’s expenses and its personnel, stating that the governing “political caste” was prone to waste. After serving out his 5-year term, he announced his candidacy for the mayoral post of the city of Florence in 2009.

Renzi won the election with 60% of the vote and carried out a massive campaign of modernization, restructuring and sustainability. He brought with him his vision of cutting down political waste by slashing the number of city councilors, thus also reducing the local government’s expenses. He also made great strides in bringing Florence into the future, installing free WiFi hotspots across the city and promoting the use of electric vehicles. During his tenure, the waiting lists for kindergartens were reduced by 90% and he focused on social spending and welfare programs. One of his landmark initiatives was the structural zero volume plan, which allowed new buildings to be constructed in the city only after the demolition of an equal volume of old edificies. His work earned him a top spot in a list of the most appreciated heads of metropolises in Italy in 2013.

Renzi’s successes in Florence turned him into a popular figure across the country. His youthful approach and desire to shake up the entire political system while admired by citizens was disliked by his fellow politicians. During his term as mayor Matteo Renzi began an initiative which would define his political career – the demolition movement, which gave him his nickname “il Rottamatore” or demolition man. He was joined by other fellow Democratic Party officials in calling for the complete renewal of the party and the removal of the old guard in favour of young politicians. Using the platform to jumpstart his political career on the national level, he joined the race to lead the Democratic Party in the 2013 elections. After coming in 2nd he threw his full support behind the winner Pier Luigi Bersani and bided his time.

The road to power

Saying that Italy was in a bad economic and political state following the global financial crisis would be an understatement – chronic issues plaguing the country’s debt-ridden economy combined with the need for austerity measures made the lives of politicians absolute hell. In the midst of the crisis, the centre-left Democratic party managed to win the 2013 parliamentary elections. Its leader Pier Luigi Bersani, however, was unable to form a ruling coalition. He resigned in favour of Enrico Letta who eventually succeeded in the task.

But in the background Matteo Renzi was moving quickly. In December 2013, he won the post of Democratic Party Secretary with an overwhelming majority and was thus presumed to be the party’s actual candidate for Prime Minister, which put him at odds with the actual Prime Minister, Enrico Letta. With tensions mounting over the next couple of months Renzi even tweeted #enricostaisereno or “Enrico don’t worry”. It turned out that Enrico had plenty to worry about as he was essentially thrown under the bus and forced to resign by the Democratic Party in favour of Renzi.

From hero to zero

At first, Renzi was one of the most popular politicians in Italy. He even managed to secure an enormous win for the Democratic Party in the 2014 European Parliamentary Elections, gaining over 40% of the votes. His economic and labour reforms managed to stabilize the country’s economy and even registered growth, finally ending Italy’s recession. Not all he did was popular however and his approval ratings took hit after hit, dipping into the low 30s. The Italian people were not happy with the way he secured the Prime Ministerial post for himself without being elected and they were not happy with his austerity-focused reforms.

His final mistake came in the form of the 2016 constitutional referendum. His government’s proposals included the complete revamp of the way politics are done in Italy, including changes to the way the Parliament functions and the division of powers between central and local actors. Renzi even tied the success of the referendum to his own political future in the hopes of mobilizing his base of supporters. Instead, that accomplished the opposite. Emboldened by the prospect of kicking Renzi out of government opposition parties, and disenfranchised voters handily rejected the proposed changes and spelled out the end for the Prime Minister.

Striking from the shadows

Many believed that his defeat in the referendum would spell the ultimate political demise of Florence’s former mayor. Recent developments have shown that to not be the case. As one of his final acts, Matteo Renzi managed to fill the electoral lists of the Democratic Party with his staunch supporters, loyal to him rather than the current leadership. This turned out to be instrumental following the collapse of the LEGA – 5-star movement government.

Renzi was known as a virulent 5 star critic – even tweeting with the hashtag #senzadime or Without me, when answering questions about a potential coalition with the Movement. But it wouldn’t be the first time he goes back on a tweet. Only last month, Renzi came out in support for a coalition agreement between the Democratic Party and the populists, completely blindsiding the current centre-left leadership. The reality for DP leader Zingaretti immediately became clear – his parliamentary group was full not of MPs loyal to the party but rather to people who owe their political life to Matteo Renzi and are at his beck and call. As a result, he was forced to submit to their demands and endorsed the creation of a second Giuseppe Conte government.

The future suddenly brightened up for Matteo Renzi, despite his low approval ratings. He yet again has the opportunity to shape Italian politics and bring the country back from the brink. The only question is how he plans to move forward. Matteo Renzi is by no means tied to the ideological tenant of the Democratic Party. He labels himself a radical centrist – much like French President Emmanuel Macron and former French PM Manuel Valls. This has allowed him an extraordinary amount of political and ideological flexibility over the years which had led to him undoubtedly improving the lives not only of the citizens of Florence but of ordinary Italians across the country as well. If the former mayor manages to rediscover the popularity he enjoyed while working in local politics, he might remain a political behemoth for many years to come.