Susanna Ceccardi, former mayor of Cascina and one of Italy’s youngest MEPs is the very embodiment of Matteo Salvini’s Northern League 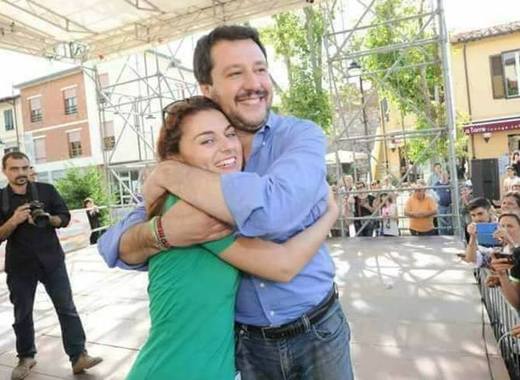 If someone besides Matteo Salvini can claim they personify the Northern League, it’s Susanna Ceccardi. She first entered politics very recently – only in 2011, when she was elected as a member of the Cascina municipal council. A few years later she campaigned but failed to get elected to the regional parliament of Tuscany but in 2016 won the mayoral elections of Cascina in the second round with 50.3% of the votes.

Susanna Ceccardi was seen as a sign that times are changing – a sign that something was broken in Italian politics. She became the first non-left mayor of Cascina since the fall of Mussolini. The first member of a rightwing party in 70 years of Italian democracy. As her political affiliation might suggest, her main appeal to voters was her anti-migrant rhetoric – messaging which also drove her straight to Brussels as she was elected as an MEP in the 2019 European Parliament Elections.

The picturesque town of Cascina is located in the traditional centre-left stronghold region of Tuscany. The region has been governed by coalitions made up of the Democratic Party (PD) and various other socialist and communist political groups since 1970. It is also one of the only three regions in the country to support Matteo Renzi’s 2016 referendum. Tuscany breathes PD. Or at least it did, until recently. You can imagine the shock when Cascina, a town governed by socialists for 70 years in a region governed by socialists for 50 years, elected its first far-right mayor.

How did it come to this? To simply say that the situation in Italy at the time of the election was hard, would be an understatement. Just as the Italian economy was starting to get back on track, the massive influx of refugees coming on boats through the Mediterranean hit hard and fast completely shattering the traditional centre-left and centre-right divide. With a struggling economy and blooming societal problems, the path was clear for populists to make headway. In comes Susana Ceccardi and her simple messaging campaign – illegal migrants out, Italians in. The success of this approach is part of an entire upheaval of Italian politics – and in 2016 it was just the start. We can now clearly see that Mrs. Ceccardi was merely the herald of things to come – with her party, the Northern League, polling at first place with 32% on the national level.

With her inauguration as mayor of Cascina, Mrs. Ceccardi immediately got down to business. Despite the flow of migrants rapidly dropping over the next couple of years, the specter of a renewed “assault” loomed large over Italian society – in no small part thanks to the constant fearmongering of one Mr. Salvini. And Mrs. Ceccardi wasted no time in answering her constituents’ concerns.

She immediately began campaigning for the closure of the Cascina refugee reception centre, claiming it to be overcrowded. Another one of her controversial measures involved restricting access of migrants to public housing – by demanding documentation stating that they do not own any property in their countries of origin. As a result of this policy she claimed that 68 of the recently deposited 71 applications were rejected by her government. Her treatment of refugees even drew the ire of the Catholic Church, which under Pope Francis has taken a strictly pro-migrant tone.

Yet, unlike her boss, Matteo Salvini, Mrs. Ceccardi has repeatedly stated that she is no devout catholic and does not really place much in the words of the church. Unfortunately, that’s where the differences end with her embracing the traditional modus operandi of the far right - disguising unabashed racism, xenophobia and fearmongering as common sense. Blaming the arriving migrants for the woes of Italian society while simultaneously stoking the fears and anger of citizens has unsurprisingly led to her and her whole party becoming the subject of constant attacks by the Italian political elite.

Yet that’s precisely where the populists relish. Mrs. Ceccardi has been instrumental in the Northern League’s ascent to power and subsequent rapid rise in the polls. The mayoral elections of Cascina in 2016 were the breakthrough Mr. Salvini’s needed to establish a foothold in the traditional left stronghold of Tuscany. Susanna Ceccardi opened the floodgates and was rewarded for her efforts, becoming the de facto head of the party in the region. Her strategic leadership led to the election of a rightwing mayor in Pisa and to the election of some her colleagues as members of parliament in the 2018 general elections.

On the back of her victories, she secured herself a spot on the Northern League’s electoral lists for the European Parliament – she was elected with over 48,000 preferences. Yet her plans do not stop there – she appears to be plotting a return to the national stage, aiming for the top job in Tuscany in the 2020 regional elections. But her lofty ambitions might prove undone before they ever come to fruition. While she is already subjected to constant critiques by her political opponents, members of her own party are also voicing their criticisms for the Northern League’s poster child, blaming her leadership for weak results in run-off elections in Tuscany.

Whatever the future may hold for Susanna Ceccardi, one thing is for certain – her success as mayor of Cascina brought about a new age of Italian politics. Even if her ambitions become undone, she has already made her mark on the political landscape of the country – and it will leave a lasting scar on its society.

Local governments are usually the authorities closest to their citizens. As heads of such governments, Mayors often bask in unrivalled democratic legitimacy. While some are perfectly content with serving their constituents on the local level for many years, others use their popularity to propel themselves onto the national and international stage and send ripples across the whole world.