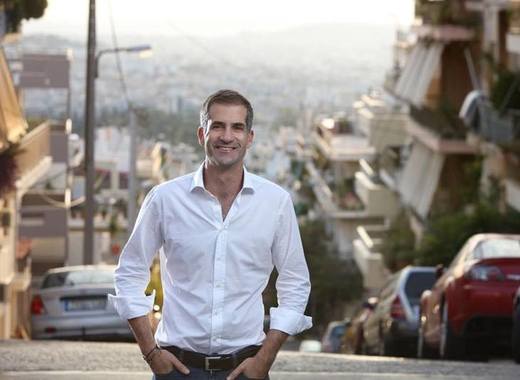 Greece is no stranger to political dynasties and the Bakoyannis family is the perfect example. Here’s a quick summary - Dora is the daughter of Konstantinos Mitsotakis – a former Prime Minister of the country and is also the older sister of Kyriakos Mitsotakis – the leader of the centre-right New Democracy and Greece’s current head of government. Dora married Pavlos Bakoyannis, another prominent Greek politician, who was assassinated by Marxist terrorists in 1989. Their son Kostas is also rising to prominence in Greek political circles, recently becoming the youngest- ever mayor of Athens.

You can tell being from the right family is a big plus in Greece just by looking at their extensive family trees. In this case, the Bakoyannises can trace their lineage all the way back to the heads of the Greek Liberation movement of the 19th century, boasting all manners of successful politicians over the centuries.

Dora Bakoyannis – a woman of many talents

Dora Bakoyannis has seen all sorts of political action – she has participated in government as a minister (twice), she has been a leading voice when New Democracy was in opposition, she became the first woman mayor of Athens in its 3,500 year history and she briefly went on to lead her very own political party.

Her first stint in government was in in the 1990s, serving as Minister of Culture under her father, who was Prime Minister at the time. She successfully contested her late husband’s parliamentary seat, following his murder over the years she kept on winning reelection with bigger and bigger margins. Her popularity didn’t waver, instead the Greek peoples’ admiration for her only grew, especially in the country’s capital. Finally, in 2002, she contested the Athens mayoral elections, winning them by a landslide with 60,6% of the vote.

Her mayoral term was full of firsts – not only was she the first woman mayor of the ancient city, but she was also responsible for preparing the 2004 Olympic Games, thus also becoming the first ever woman mayor of a city hosting the ancient event. Her achievements and her exemplary service to her constituents led to her winning the 2005 World Mayor Award. Despite her success and renown, she left the post of mayor before her term was up and went on to become Greece’s first ever female minister of Foreign Affairs in 2006. During her mandate she represented Greece at the United Nations Security council and was instrumental in the promotion of regional and European cooperation in the Balkans and the Mediterranean.

During the Greek financial crisis, despite being in opposition, she supported the government’s proposed bailout program and austerity measures. These actions which she believed were necessary to secure the future of the country led to her being expelled from New Democracy. A couple of years later, after creating her own party and contesting elections, she was readmitted.

Compared to his mother, Kostas’s political biography will look quite scarce, but to be fair, it’s hard to compete with Dora Bakoyannis. His first political breakthrough came with him being elected mayor of the small town of Karpenisi in 2010 – the hometown of his late father Pavlos. He won the elections while simultaneously defending his mother’s actions of supporting the government’s austerity measures and bailout program, claiming that the country needs suicidal politicians who are ready to sacrifice themselves for the greater good. During his term he significantly improved the business climate in the city, improved its waste management system and made great strides in making it more inclusive.

His obvious devotion to his constituents led to his rapid rise in opinion polls for other posts. In surveys conducted in 2013, his name consistently came out on top of voting intentions for the governorship of Central Greece – despite him not actually being a candidate yet. His exemplary service in Karpenisi was enough to convince voters from all around the region that he was the perfect man for the job. Thus, he handily defeated the SYRIZA candidate in what was an otherwise disastrous election for centre-right candidates around the country. He went on to serve out his term until the 2019 local elections.

Finally, in 2018, he decided to follow in his mother’s footsteps and announced his candidacy for mayor of Athens. His popularity secured him a lead which his opponents never managed to surpass – he won the elections with 65% of the vote.

The shifting sands of Greek politics

The Bakoyannises and their relatives have been shaping Greek politics for decades. Their most recent rise to prominence comes at a time when the country has been sorely lacking in leadership. Greece is still barely recovering from the global financial crisis of 2008 and the failure of SYRIZA to deliver on their promises coupled with near-constant scandals have only led to the further disenfranchisement of voters. The political crisis which unfolded in the summer of 2019 was the culmination of years of grandstanding and wild populism which in the end delivered the keys of power back to the centre-right New Democracy and more specifically in the hands of Dora’s brother and Kostas’s uncle - Kyriakos Mitsotakis.

With their terms only just beginning the members of one of Greece’s most prominent political families have huge shoes to fill. Not only that, but they also take charge of a country which is in dire need of nurturing back to health. And who can argue that those who trace their lineage to the country’s liberators and boasting immaculate political credentials aren’t the perfect fit for the job?

In Greece, politics is a family matter. And without a doubt the Bakoyannises have always come out on top.