Massimiliano Fuksas: It is real urgency to start think about our project in terms of sustainable development. We are completely late

“We must begin to think of the suburbs as the center, because here people live.” 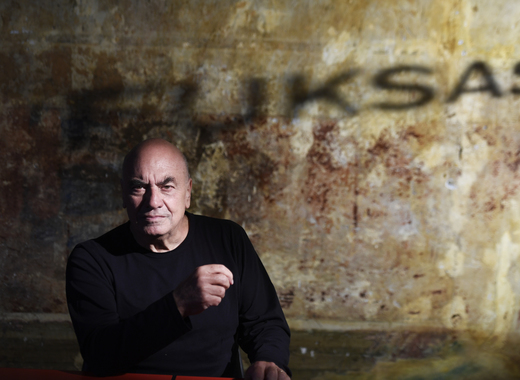 Massimiliano Fuksas of Lithuanian descent, was born in Rome, where he graduated in Architecture from the University of Rome “La Sapienza”. From 1994 to 1997 was a member of the Planning Commissions in Berlin and Salzburg. From 1998 to 2000 he directed the “VII Mostra Internazionale di Architettura di Venezia”, Less Aesthetics, More Ethics. In 1999 he received the Grand Prix National d’Architecture Française. In 2006 the Honorary Fellowship of the Royal Institute of British Architects, London and was named Cavaliere di Gran Croce della Repubblica Italiana. In 2010 he was awarded with Légion d’Honneur by the French President. In 2012 received the Global Lithuanian Award. In his work is dedicating special attention to the study of urban problems in large metropolitan areas.

Studio Fuksas is one of the most outstanding international architectural firm in the world. The company has developed an innovative approach through a strikingly wide variety of projects, ranging from urban interventions to airports, from museums to cultural centers and spaces for music, from convention centers to offices, from interiors to design collections. With headquarters in Rome, Paris and Shenzhen, Studio Fuksas has completed more than 600 projects and has worked in Europe, Africa, America, Asia and Australia, receiving numerous international awards.

For many years you have devoted your attention especially on the study of urban problems and in particular of the suburbs. How the cities have changed, is there a difference between the problems of the small and the big cities?

Speaking of cities, the only certain thing is that the city is the place where people live. For many years I keep repeating that we must begin to think of the suburbs as the center, because here people live. The measure is fundamental because the residents of the city are the humans. The small cities can easily find a balance with a strong and big infrastructure work. The metropolises, in the world, go beyond any possibility of rationalization. Precisely on this we must work, not only with big courage, but also with great attention to the inhabitants.

Which are the new trends in urban development?

The trend is simple and it is only one: develop the city in direction that it is no longer stain of oil or concentric, but increasing, where it is possible, the density and reducing, consequently, the extension of the suburbs.

In Europe, have we learned to think about our new projects in terms of sustainable development or we are not yet mature enough for this?

It is a real urgency. We are completely late.

Your architectural masterpieces are all over the world, which is the project you are most proud of?

There are so many built and unbuilt projects that it is difficult to choose. I like to think that it will be the next one ... every time, feeling again, the emotion of the beginning.

On which European projects are you currently working?

Few days ago we were informed about the winning of the competition for "Capo Grande Tower", a tower that will rise in the coastal panorama of Koper, Slovenia. This is a double ellipse structure slightly inclined towards the sea which I believe will immediately become "a new symbolic element of the city". We have recently completed the Euromed Center in Marseille, which is part of a public project called "Euroméditerranée", and which deals with renovating some urban areas of the city. Among the various projects in progress, I remember the complex Is Molas Golf Resort in Sardinia, the Duomo Station of the Naples Metro and the tower under construction for the Piedmont Region, 205 meters in height, which is part of the masterplan we designed for an extensive urban transformation project in Turin.

Which is the most innovative city in Europe according to you?

It is a city that does not exceed 150,000 inhabitants, with complete infrastructure and services for the inhabitants, but still undergoing transformation. I could say: Vienna, Berlin, Copenhagen.

How do you see the future of the European cities - smarter, greener or other?

Even more humane and, in particular, with greater attention to the suburbs and disadvantaged classes.