Mayor of Sofia, Yordanka Fandakova, in an interview about the Presidency of the Council of the EU going to take place next year in Bulgaria

The important event is going to take place in 2018 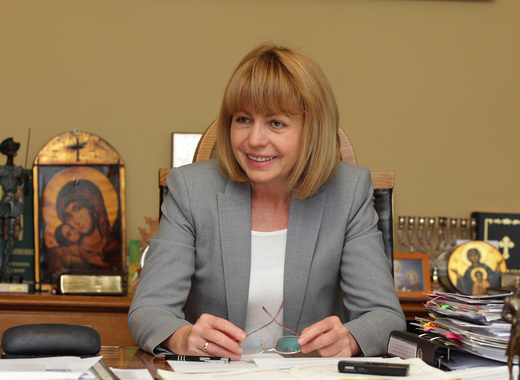 Mayor of Sofia, Yordanka Fandakova, in an interview about the preparation of the Bulgarian Presidency of the Council of the European Union, the sharing of experience and what is going to take place in the Bulgarian capital next year.

Sofia will take the Presidency of the Council of the EU. What measures is Sofia Municipality going to take and what is the delegation going to see in Sofia?

The preparation for the Presidency is definitely a very important task involving the whole nation. I believe that Bulgaria and Sofia in particular will perform well. A special Ministry was created for the purpose and Minister Lilyana Pavlova is working very actively and all the work is well coordinated. Of course, for Sofia, this Presidency is a very big opportunity but also a great challenge. It is an opportunity to present Sofia in its best to our guests, politicians, journalists, the delegations’ teams. It will however, be a challenge for the traffic and the security of the city. Therefore, we work very hard to prepare for the event with many state institutions. We work for the better access to information, improving the transport to and from Sofia Airport, also to the destinations in Sofia that are included in the program of the event. Together with the Ministry of the Interior we created a government-funded project for a network to connect all centers for video surveillance in one common center. By the end of the year we have to have a unified security network involving all video surveillance cameras so that everything could be observed by the Ministry of Interior. This system will be kept after the Presidency and will work for the better security measures.

We have also prepared a portfolio of tourist attractions and routes for the delegations. We hope that despite their busy program they will find the time to take a walk around the city. That is why I am saying that this Presidency is also a huge opportunity for tourism development. Sofia Municipality we take part in programs such as Europe, Culture and Culture Calendar as an additional part to the national program, developed by the Ministry of Culture. At the same time, during the Presidency, thanks to the effort of the Bulgarian European Commissioner Mariya Gabriel, the Digital Assembly in Europe will take place in Sofia. This is a huge opportunity to show the readiness of Sofia to develop the digital sector. This is one step forward for Sofia on the way to becoming digital capital of new markets.

You spoke about the ambitions of Sofia to become a green city. This is also the ambition of many of your European colleagues. Vienna Municipality has stated in a document of the local council that at least 50% of the city has to be green in order for the city to be considered such. What do you think is the percentage in Sofia and what is the Municipality doing to cut harmful emissions coming from the various heating sources people use, cars and transportation?

The biggest challenge in this area is preserving the air clean. All our efforts are concentrated into that. We have had significant improvements in recent years in this area. However, the fine dust particles in the air continue to be harmful for the people. But this also depends on the way people live. We have developed a program and step by step we are implementing our projects.

I already talked about the measures for improvement of the transportation system, encouraging people to use public transport, bicycles or walk. We are working on the extension of the metro line. By 2019 there will be 12 new kilometers of rails and 12 new stations. By the implementation of the metro system we have cut down 75 000t of harmful emissions and expect to reach 90 000t less harmful emissions when the new metro line is completed. This is definitely not only a huge transport project but also ecological.

We have managed to solve one of the biggest problems – household waste disposal – by creating new systems for treating it. We have received an award for green city from France. We have replaced 50% of the old buses. We are in the process of buying 120 new buses and the first 20 electric buses. However, there is a lot to do regarding personal automobiles and cargo vehicles and also the households’ heating systems. We are closely working with the Ministry of Environment and Water. They are in the process of creating a standard for fuel, coal and wood for heating. The newest project for the purchasing of heating systems is about to be implemented in Novi Iskar. These new heating systems will be given to 30 households to test. This is a project financed by the EC and the more people are involved the better results we will have.

A question out of curiosity: which is your favorite European city?

I do not have a favorite European city. Every city has its own atmosphere and I appreciate that. Every city is unique in its own way. Sofia is a great city and every visitor here appreciates that. The first impression always is that Sofia is a green city. But in doing our daily tasks we often miss that because we are used to it. Not in many cities ypu can admire the mountains so close. We are used to it but we should not forget to preserve it. However, not much is known for Sofia cultural and historical heritage and therefore we should work towards popularizing these aspects.

What historical and cultural destinations are included in the portfolio for the delegations of the Presidency?

My colleagues are working on that at the moment. We have invested a lot in the recent years for the reconstruction and preservation of historical destinations. Walk tours will definitely be included. We are also proud of the opening of several new museums. The Museum of the history of Sofia attracts many visitors, also the Archeological museum.

How is Sofia going to collaborate with London’s Transport Agency on the project about hydrogen buses?

We are definitely going to collaborate and try to gain as much experience from London as we can. As you know London is one of the first cities to test such type of buses. We are interested in all innovations. I believe we have to dream big and have vision for the future.

We had a meeting not only with the Mayor of London Sadiq Khan but with his deputy as well who is also working in the transport field. We discussed the issues and the talks are definitely going to continue, we will research their experience, they will see the effects on their city. However, such technology is still very expensive for Sofia but technology develops fast after all. If 2 or 3 years ago we could not even image purchasing electric buses, today this is possible.

It’s been 10 years since Sofia is a member of the European Union.  What has the Union given to Sofia?

The European Union has given a lot to Sofia – in the first place to be a part of it, to travel freely, to choose where to continue with education, to be able to come back and apply the learnt. I have always believed that the most important aspect of being a part of the Union is freedom – to be able to select, to develop. The solidarity of other European cities helps us develop faster in many aspects.  Even though right now Brexit is happening, we should not stop interacting. I will refer back to the opportunity to exchange good practices, share experience which will help us take decisions faster.

We have great contact with Vienna, Paris, Rome, Amsterdam, Zagreb, Ljubljana, etc. Our system of collecting and processing waste is a fact thanks to the experience we gained from Geneva. My European colleagues are now gaining experience form Sofia. We are in constant contact which is an opportunity that the EU provided us with.

What are the big sport events to take place in Sofia next year?

Sofia will be a European Sports capital in 2018. We have earned this thanks to the support of the Ministry of Youth and Sports, our European partners and the personal support from Andrey Kovachev, European MP. We have been working on this project for three years and next year we will implement the program in Sofia. The volleyball world championship, also the rhythmic gymnastics world championship will take place in Sofia.

Do you think that a day will come when it will be decided that no cars will allowed to enter the city center on weekends, for example?

Such projects are not realized easily because there is a lot of resistance on part of the drivers. But I believe we will get used to practices implemented in other European cities such as a day without cars. Our efforts are focused on making more pedestrian zones and bicycle alleys – the opportunity to rent a bike, go to work and return it. We are in good collaboration with the new Dutch ambassador.

A significant part of the European citizens is not aware of where EU fund are going. That is one of the reasons why we created the    platform about the EU municipalities – TheMayor.eu. The platform popularize the good practices of EU cities. What do you think about such platform and do you think there should be more ways in which EU citizens to gain information about where EU money is going?

This is a very important project. It is crucial that EU citizens know where their tax money are going. There are countries which contribute less and there are those that contribute more but everybody is paying for that. Sofia is one of the good examples of transparency regarding the projects financed by the EU. All citizens know that the metroline is EU funded, the waste plant too is EU funded. A lot of citizens actually think that everything is EU funded. Thanks to the platform TheMayor.eu this information can reach many people, so it is important that it exists. It is important also for us, mayors, for our municipalities. We will be able to see how a mayor from another city has managed to solve a problem that exists in our city as well. Congratulations once again.

Find out more about Sofia here