Mayor of Viana do Castelo, Mr. José Maria da Cunha Costa: Today, the mayors have a different mission than they had in the past. Today, we can only do something if we cooperate

“This platform can only be seen as an asset and an instrument that will give voice to local authorities and certainly launch local projects at European level.” 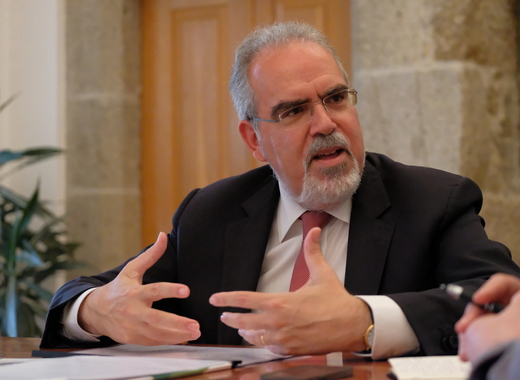 Source: Municipality of Viana do Castelo

This year you have begun your third term. How did you manage to win people's trust?

It is the duty of the mayor and the municipal executive board to lead the work with all the strength of the municipality. And above all, we have a great concern: the one of the territorial cohesion. What we have done already and what I have committed myself to do at the elections was to develop a policy of territorial cohesion, to create conditions for the city to develop harmoniously. Our greatest commitment in the recent years has been indeed creating conditions for the road networks, improving the road structures and building better sports facilities, so that there are better conditions for business establishment, that respond to the social values. I could say that this is our main concern and I think that the joint efforts of the local authority are recognized by the people.

Can we say that Viana do Castelo is the largest automotive cluster in Portugal?

This is in fact one of the main sectors of activity. We are having a set of investments in the automotive sector which is, indeed, abnormal. Only in Viana do Castelo we have seven new investments in progress. We are talking about 180 million Euros until 2019 with the creation of 1800 new jobs. These are impressive numbers, but they presented new challenges to us, so we developed the concept of creating a cluster because there is a need for regional cooperation in various sectors.

In terms of vocational training, we have excellent universities and polytechnic institutes, excellent business schools, but we have to create conditions so that there is an articulation and a redirection of the courses for the needs of the job market trends. The establishment of the companies was very fast and we know that the institutions have their own timing. Because they are slower, we needed to develop a strategy for the automobile industry to redefine the vocational guidance and also to have it in the reprogramming period of Portugal 2020 funds available for the consolidation and infrastructure of business parks in the region. There is a great effort being made by municipalities in the acquisition of land and infrastructure to connect to national networks and highways.

Secondly, we have to take advantage of this investment to acquire more knowledge. It is important that, in the context of the state's support through AICEP, tools are available and allow cooperation between manufacturing units and their development centers with our universities and polytechnics so that cooperation protocols can be provided and we can establish development centers in the field of car design and everything that has to do with this important cluster in the region.

You focus heavily on the infrastructure problems in North Portugal. Tell us more about the projects you have been able to implement to put this region into a 21st-century transportation system.

Today, the mayors have a different mission than they had in the past. Today, we can only do something if we cooperate. Today, the local councils have to be agents of inter-municipal and even interregional cooperation. Today, Viana do Castelo and Alto Minho are good examples of raising foreign funds, creating jobs and promote their territory. And it was this cooperation with Galicia that was fundamental for us to be able, for example, to mobilize the Portuguese and Spanish governments for the modernization of Minho Line.

Today we know that we are contributing to the new pattern of Europe because cross-border cooperation is considered as a good example in Brussels. I can give you a concrete example: a good example of Galicia–North Portugal Euroregion, we are cooperating with a Brazilian municipality through a project that is centralized in Brussels. In other words, Brussels already recognized in this region and in this cooperation a case study that serves as a good example for Latin America. With partnerships and active participation we promoted our territory and at the same time we learned a lot, and today Viana do Castelo and Alto Minho are international references in the industry , tourism and even in the automotive sector. I could say that such cooperation is now a fundamental instrument for any mayor.

The economy of the sea is very important for the development of your municipality.This year will be launched the new accesses to the sea port of Viana do Castelo. Tell us more about such an investment that had never been seen in Viana do Castelo in the past.

After more than four decades, the construction of the road access to the commercial sector of the port of Viana do Castelo will finally advance, in a joint work of the Port Administration of the APDL-Douro Port, The Port of Leixões and Viana do Castelo.

The project, which is expected to have community participation in the current framework of Portugal 2020, is of extreme relevance to the region, since, at present, terrestrial accessibility to the port of Viana do Castelo constitutes a constraint to its growth. The access is currently going through Darque village, whose layout is restrictive. To increase the competitiveness and attractiveness of the Sea Port, it is necessary to increase traffic flow, reduce travel times for heavy vehicles and reduce transport costs. This new accessibility also facilitates the access to the A28 and the Neiva/Chafé/Alvarães Industrial zone, boosting the imports and exports of new installed industrial units, as well as the hinterland of Alto Minho and Braga Metropolitan Areas and Porto. I am sure that the access will make a big differencefor the economic development of the region and that the release of this process is very much due to the political will of the Minister of the Marine, Mrs. Ana Paula Vitorino.

Adopted as a strategy by the Municipality of Viana do Castelo, urban regeneration is assumed as a municipal policy with a recognized value on a local and national level . How did you achieve these indicators and results?

The City Council has been implementing a Incentive Scheme for 2018, which provides rate reductions and exemptions for investors in tourist enterprises and business accommodation, economic activities related to the ranks of agriculture and regional-based forests and the sea, urban regeneration, technological sector, shared services and industries/creative activities, modernization of commercial spaces, restaurants and bars, and off-sets of fees for the activities in the Business park at North beach.

The measures, aimed at assuring policy framework for investments that drives development in activities related to endogenous products, rehabilitation and real estate, were created in 2010 and are now renewed and expanded in 2018. These fiscal incentives include the creation of conditions to exempt 100%  of local-based investments, that is, for companies that intend to create new facilities or expand or relocate investments within the municipality of Viana do Castelo, but also the scope, which now integrates the technological sectors and creative industries.

Since its establishment in 2011, the Municipality has already supported companies with exemptions of more than 236 000 Euros to create almost 3000 jobs.

Viana do Castelo was pointed as one of the best beach towns in southern Europe. Also in the city is a set of several films and soap operas. How do you manage to preserve your city even though it is such a popular place?

Over the last years, Viana do Castelo has been hosting, the recordings of films, short movies, shows and even soap operas, such as TVI's recent hit "Heiress ". In order to respond to the many requests, national and international, for cinematographic and audiovisual productions in the city of Viana do Castelo, it became necessary to create an organized structure in the Municipality to respond to the different requests. Therefore, a Film Commission, called Vianafilm, was created, in order to affirm Viana do Castelo as a scenic area of ​​exception and for the city to be seen as a film friendly, which is becoming a privileged destination for filming and photographic productions, with capacity to attract cinematographic and audiovisual projects, both nationally and internationally.

Our greatest asset is undoubtedly this Film Commission and, of course, our landscape and its natural beauty.

The Municipality of Viana do Castelo works very much in the social sphere. A good example is the social project "Teaching the Heart" which aims to promote inclusion, cohesion and community development. The municipality of Viana do Castelo will also promote Laboratories of Social Innovation with the objective to develope innovative workshops and projects that involve local agents from different areas who come together to contribute to the resolution of social challenges. Tell us more about what you have achieved so far in this direction?

The project "Teaching the Heart" aims to identify the strengths and potentialities of the community and its agents to positively contribute to greater social cohesion and inclusion, with a view to prevention and/or overcoming. This project promotes the inclusion, cohesion and development of the community and aroses from the need to close the social and territorial fractures of the municipality.

The municipality of Viana do Castelo will also promote Laboratories of Social Innovation with the objective of developing innovative workshops and projects that involve local agents from different areas and who come together to contribute to the resolution of social challenges. To this end, we have as partners the Family Assistance Office and SIRD - The Education and Recreation Society of Ddarque and our mission is the affective literacy, which involves the primary prevention of gender violence in pre-school education, which we intend to build and to implement, in collaboration with educational agents. This project can be seen an innovative program to promote citizenship and non-discrimination. The Education and Recreation Society of Darque, located in the village of Darque, is involved in Art as a Social Intervention, through the methodology of pedagogical intervention linked to the performing arts.

I can say that the intermunicipal community Alto Minho and the EuroRegion have been represented at the highest level, not only in the Committee of the Regions of which I am the head of the Portuguese delegation, but also through the contacts we have had with the Commissioner for Regional Development through various projects . Now, as it has been said before, it is with cooperation, relationships and partnerships that we can have a voice. Therefore, this platform can only be seen as an asset and an instrument that will give voice to local authorities and certainly launch local projects at European level.