Mayor of Zagreb, Milan Bandić: If you truly love your city and your community, you have surplus energy and nothing is impossible

“I’m most proud of something all the people of Zagreb did together: We made our city open and accessible and even more tolerant and safer.” 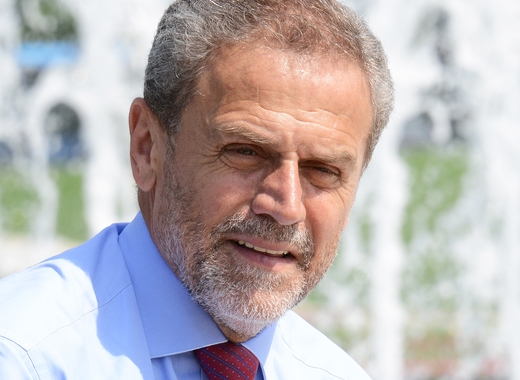 Milan Bandić was born in Grude, today in Bosnia and Herzegovina in 1955. In 1974, he moved to Zagreb to study at the Department of Political Sciences at Zagreb University. His political career began at the municipal committee of Pešćenica, one of the municipalities in Zagreb. In 2000 he was elected mayor of the capital. His Zagreb Development Program is called "Vision of Zagreb for the 21st century". One of the key points in it is the improvement of environmental policies, including water treatment, separate waste collection and the creation of processing points. Infrastructure is also at the heart of the mayoral program and it is focused on improving railway services, airport reconstruction and gradual renovation of the urban road network. Culture, sports and education are subjects of various projects to improve and renew the identity of the city. This includes the reconstruction of Zagreb Medvednica's historic part and the renovation of the green areas around the Sava River area.

Mr. Bandić, you are serving your sixth term as a mayor of Zagreb, and you are still so active and close to the citizens. Is this the secret of your success?

There are no secrets. Hard work is the key: 365 days non-stop, 16 hours a day and more. This primarily consists of staying in touch with people, focusing on their problems, and trying our best to find a solution together. You can put on an act for a while, but not for 18 years, which is how long I've been head of the City thanks to the people of Zagreb. If there is a secret, it is the satisfaction I find in this kind of work. Admittedly it requires a tremendous amount of energy, but if people and their prosperity are your main motivation in life and if you truly love your city and your community, you have surplus energy and nothing is impossible.

Many essential projects have been completed during these 18 years, the Zagrebacka Avenue, the transportation system, Homeland Bridge, Kvaternik Square, Arena Zagreb and many more. Which is the project you are most proud of?

You are right, there are a lot of them, plus I could add a book-long list to the ones you mentioned. All of them have had a positive impact on the quality of life in Zagreb, each in its own way, be it traffic, public transport, sports, culture, health… There is a large number of new projects in phases of preparation or implementation, and the guiding thought behind all of them is to make our city a more pleasant place for life and work.

I really wouldn’t know which project to single out, but I’m most proud of something all the people of Zagreb did together: We made our city open and accessible and even more tolerant and safer. It is characterised by multiculturalism, multiethnicism, and multiconfessionalism. My colleagues from Europe often tell me that they have a lot to learn from the people of Zagreb in that respect.

What's next to be done as part of your program “Vision of Zagreb for the 21st century”?

According to the programme, the vision of Zagreb's development is not reflected only in the sum of its projects, but that it also entails the development and implementation of its administrative, economic, social and urban revival and the development of all forms of excellence in Zagreb. This is an ongoing task of this City Administration, while Europe's experience shows that partnerships between towns and regions results in the fastest quality development.

The development strategy of the City of Zagreb defines the vision of its development as an urban incubator of sustainable concepts, entrepreneurship, and new values.

We want to push the limits in all important fields of work and activity via an entrepreneurial approach that does not settle for the status quo, but seeks out new ideas in the creative process and aims to create new values.

It is still our focus to develop our start-up scene and strengthen investment potentials. In response to unfavourable demographic movements, we’ve introduced the status of stay-at-home parent. In families with three children, one of the parents is entitled to remuneration in the amount of the average salary in the Republic of Croatia. The funds that we set aside are substantial, but we believe that without people it all becomes meaningless.

Furthermore, we are trying to promote Zagreb as a top tourist destination, and quite successfully at that. Our friends from all over Europe are increasingly coming to see Zagreb as a jewel, unacknowledged thus far because of a number of factors.

Croatia is the last European Union member. For nearly 5 years of membership, how the EU supported the development of Zagreb?

Following Croatia's accession to the European Union on 1 July 2013, new opportunities opened for co-financing projects and the funds and the range of investments broadened considerably as well. In December 2014, the Operational Programmes “Competitiveness and Cohesion” and “Efficient Human Resources” were adopted. It is important to mention that it is also possible to use the mechanism ITI-Integrated Territorial Investments for the activities pertaining to sustainable urban development with a pronounced territorial dimension.

The funds provided by the EU serve as an additional financial injection for Zagreb’s development. The European Union recognises the importance of cities as the drivers of development. In this financial period, 2014–2020, during this year and in the two years ahead, in addition to the mentioned instruments, cities will also gain access to additional funds intended exclusively for the development of cities via the Integrated Territorial Investments mechanism.

The City of Zagreb and its partners developed and submitted 102 project proposals worth more than HRK 1.1 billion. The projects vary in terms of topic, from the modernisation of Zagreb’s ZOO to projects in the fields of traffic, waste, water supply and drainage, impressive entrepreneurial infrastructure and health, energy, and the revival of cultural heritage facilities and old abandoned objects. Considering that preparations for high value projects take a considerable amount of time, the results will be visible only in the years to come.

What technological processes are you implementing in the municipality services?

The Zagreb Smart City concept is recognised in the main strategic development document that is part of the regional development policy of the City of Zagreb, the 2020 Development Strategy, among many other documents. The strategy offers a wide framework for potential application of smart city concepts that will be based on professional analyses, i.e. well-established competitive advantages and characteristics of the City of Zagreb. In addition, a separate implementing document/sector of the Smart City Strategy – Zagreb Smart City is also being drawn up to specify the financial and institutional framework for activities, projects, and programmes.

In practice, the City of Zagreb uses advantages introduced through technological achievements, especially services for the public (eg, My Zagreb, an informative user portal and mobile application for citizens and economic operators in Zagreb). They are envisaged as an integral solution for communication with citizens through a central access point to all e-services of city administration bodies (City of Zagreb, Zagreb Holding, and public institutions owned by the City of Zagreb) via several modules. I should single out Consumer Complaints, a module that enables citizens to participate directly in the processes of communal maintenance in the City, report problems in the City of Zagreb and keep track of their resolution. The web and mobile application also notifies users about the situation in the City Administration, enables citizens to keep track of current changes in public transport and re-routing of traffic and to be informed about any events in the city and other current topics like health, social welfare and education. Free Wi-Fi with wireless hotspots in Zagreb was also implemented. This service will soon also be available on trams and buses.

We should also mention Zagreb Innovative City: which is a system that allows citizens to comment and review ideas, which are then examined by the City Administration and Zagreb Holding. The best ones are implemented.

Zagreb, the crossroad of central Europe is known as a tourist city, share other strengths not so popular for our audience.

As of 2010, tourism in Zagreb has been on the rise. Events organised and held in the City of Zagreb (e.g. Advent in Zagreb and various festivals, such as the Inmusic Festival) contributed to an increase in overnight stays and tourist arrivals and to the recognition of the city and what it offers to tourists. Also, for a third year in a row, we are the proud recipients of the Best Advent in Europe title, while UK’s The Guardian included us amongst the 10 best European towns for a short winter holiday.

Zagreb is an ideal link between Central and Mediterranean Europe. In the geographical sense, it integrates various segments, the most recognisable historical unit being the Lower and Upper Town with Kaptol, numerous museums, churches, galleries, schools, public institutions, stores, and historical sites, and the Dolac marketplace. Mount Medvednica, with its ski slopes that play host World Cup skiing, in the north. In the south, there is the Sava River with its green sports/recreational zone and the lakes of Bundek and Jarun as well as the Zagreb Hippodrome.

All in all, the tourism industry is successfully keeping pace with the recent interest shown for Zagreb. The number of tourist attractions is on the rise daily, but there are also smaller manifestations that are the essence of tourism and that give the city a recognisable rhythm and irresistible charm. That is why tourists keep coming back and why they leave happy. Zagreb is a pleasant, lively, exciting place, everything is within reach, since it is not too big, and it has everything that one might need. We like to say that Zagreb is a charming and innovative city tailored to human desires.

Anything that improves co-operation, communication, anything that connects and places citizens on the centre-stage deserves our support.

Participation of citizens in the process of making policies and inclusion of citizens in various initiatives to help in the decision-making process is key to the development of a stable and modern society, so that is why the unified platform of EU cities is commendable. The experiences of others and the exchange of information concerning recent topics and issues that we have to address in different parts of Europe are important in the process of seeking answers to the challenges we face. So, congratulations!

Find out more about Zagreb here