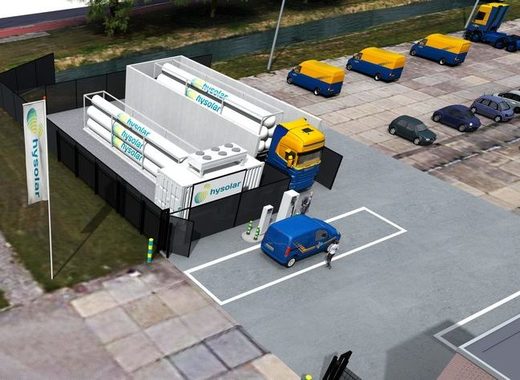 A big hydrogen project was launched in Nieuwegein in April, reports Allesoverwaterstof (All about Hydrogen) with a group of four companies having joined forces to produce green hydrogen locally.

Clean energy for the business in Nieuwegein

Four companies based in the Plettenburg industrial estate in the Dutch city of Nieuwegein have announced their cooperation in an ambitious sustainable energy project. A consortium comprising Jos Scholman BV, KWR Water BV, Allied Waters BV and Hysolar BV wants to showcase a functional and attractive economic model for local investment in green hydrogen with public hydrogen filling station and fuel vehicles. What is more, they have been granted financial support by the national government.

The solar fields in the industrial estate are expected to begin the production of solar energy very soon. Adjacent to them will be placed an electrolyser capable of producing 250 tons of green hydrogen every year, using sustainably generated electricity. The installation of wind turbines in the vicinity is also considered for the future.

A pipe of around 1 kilometre is currently being constructed. It will connect the electrolyser with the site of Jos Scholman company where the petrol station will be located.

Towards the energy transition of businesses

For a few months now, there has been a hydrogen refuelling station for passenger cars on the site of KWR Water, but it is temporary. Applications for a new one this time on the site of Jos Scholman have been submitted. Should the application be approved, the station could potentially supply trucks and buses with zero-emission energy as early as this year.

The first user of the new project is expected to be the contractor Jos Scholman who will make its resources more sustainable by replacing its usual vehicles with hydrogen-powered ones. But the project’s scope goes beyond company profit.

It is seen as an example of how zero-emission transport can be integrated into a sustainable energy system and sets a good example on how this model can be replicated elsewhere. What is more, the project authors aim to show how the heat released during the production of hydrogen can be put back to use for the energy needs of local buildings.