Miskolc Advent Tram named the most beautiful in Europe 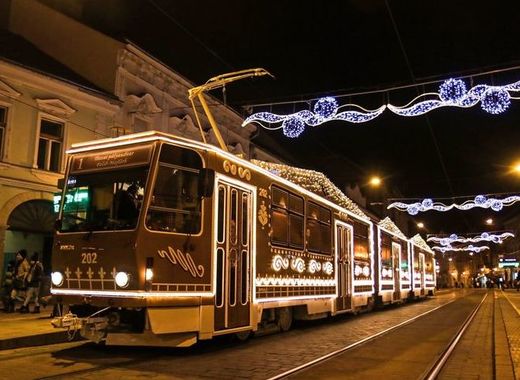 The gingerbread house-styled tram of the Hungarian city of Miskolc has retained its title of Europe’s Most Beautiful Advent Tram, winning the third annual competition organized by Czech transport magazine MHD86.

The KT8D5 Tatra 202-type Christmas tram which operates for eight years now, emerged as an absolute winner in the international survey with record 52,332 votes out of 73,624 participants.

Miskolc City Transportation Ltd. (MVK) thanked on its Facebook page everyone who voted for and “contributed to the dream, creation and transportation of the Gingerbread Advent Tram”.

Europe's most beautiful Advent Tram is saying goodbye today, January 6, to residents and tourists of Miskolc, until next Christmas when it will undergo a traditional transformation. Every year this tram greets passengers and passers-by with a brand-new look which accounts for its huge popularity.

In 2018, the tram got a fairytale design as a blue-coloured frozen castle. In 2019 it was remodeled into a gingerbread house with furniture made of this Christmas delicacy and sprightly decorations including lights, curtains, and 3D elements.

And the runners-up are…

As MHD86.cz reports, a total of 23 Christmas-themed trams (six more than last year) competed for the Europe’s Most Beautiful Advent Tram title for 2019. Voting on the portal started in the middle of December.

With 16 647 votes in favour of, respondents in the poll gave the second place to Pilsen and its Christmas decorated Vario LF2 / 2 IN tram. The third position was occupied by another Hungarian entry - Budapest’s illuminated historical tram (3022 votes).

The fourth place went to Bratislava with its decorated T6A5 assembly and the fifth place to Brno with its T3 tram. The Hungarian Szeged tram finished sixth. Basel, Szczecin, Zurich and Vienna rounded up the top ten.

Despite the large number of readers from the Czech capital, Prague’s Christmas tram Škoda 15T backslided to the 13th place, receiving only 510 votes, regretfully observes MHD86.cz.