Moving images under the stars 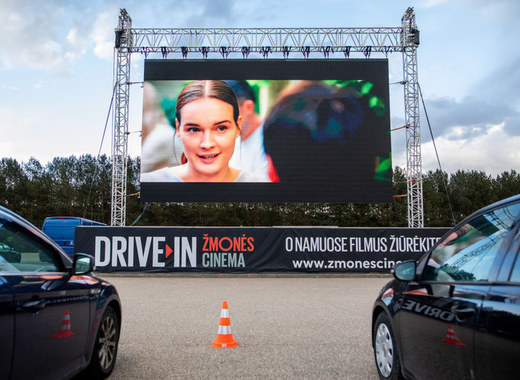 Bored to death of staying at home for days on end under the Covid-19 emergency, people are rediscovering long forgotten pastimes. One such is the drive-in cinema, which reigned supreme in spring and summer before the advent of TV.

Probing new ground, ŽMONĖS (PEOPLE) Cinema drive-in project was initially launched in Lithuania’s capital Vilnius with eight film screenings. The venture proved such a resounding success that organizers are now communicating with other municipalities and plan the development of the project.

"The drive-in cinema launched in Vilnius attracted great interest - tickets to the screenings were sold instantly and there were over two thousand spectators on the first weekend. We received a lot of inquiries from all over Lithuania, asking when it will be possible to watch cinema from the car in their cities," recalls project initiator Tomas Balžekas.

The second stop of the movie caravan is Kaunas, where motorists will be able to enjoy films on the big screen near "Žalgiris" arena starting this evening, 24 April. The screenings will be held under strict social distancing measures: getting out of the car and even opening the windows is not permitted. There must be no more than two people in one car, and there is no exception to family members.

To avoid the possibility of contact, tickets will be sold online but not at the event venue. People belonging to risk groups, such as the elderly, are discouraged to attend the screenings. All visitors must adhere to the sneezing and coughing etiquette, organizers point out.

"The extended quarantine period gave many the opportunity to take the book in their hands, to spend more time with their family. However, people also missed the thrill of entertainment. So far, entertainment options are still very limited, so the outdoor cinema in Kaunas, I believe, will be that safe and accessible attraction in today's conditions, ” says the Mayor of Kaunas Visvaldas Matijošaitis, quoted by the project’s website.

As the coronavirus-dominated reality is already high on drama, the PEOPLE Cinema drive-in programme is made up of more positive and popular movies. The symbolic opener in Kaunas will be “Another Dream Team” by Marius Markevičius. The inspiring documentary brings us back to the 1992 Olympic Games in Barcelona, ​​where the national men's basketball team played for independent Lithuania for the first time.

In Kaunas, as in Vilnius, PEOPLE Cinema drive-in sessions will take place throughout the summer.