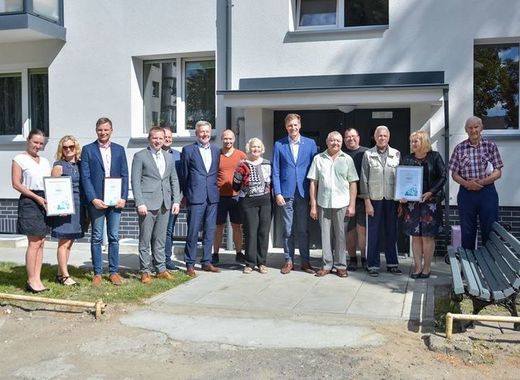 A multi-apartment renovation project implemented in Marijampolė has been recognized as the best in Lithuania. The municipality wins the title Renovation Project of the Year, organized by the Housing Energy Efficiency Agency (BETA), for the third consecutive year, which is a feat in itself.

Welcoming the association of owners of the multi-apartment building "Topolis" at 7 Jaunimo str., which had won the competition, the Mayor of Marijampolė Municipality Povilas Isoda, said, quoted by the municipal Facebook page: “We currently have 62 renovated buildings, and another 29 buildings are being prepared for the renovation process. Thus, according to the size of the municipality, we are one of the leaders in the whole of Lithuania. It is good that experts see our municipality as the Lithuanian capital of renovation.  Equally important, residents also feel the benefits of renovation. The municipality, in turn, is ready to help renovated home owners continue to manage their environment. The amendments approved last year stipulate that the residents of renovated buildings are given priority in submitting applications for the renewal of parking lots and other projects for the improvement of the environment. ”

Throughout March, the public had the opportunity to learn about the success stories of selected apartment buildings and cast their vote for their favourite project. After an open online vote, the apartment building on Jaunimo str. received the most public support. Its renovation works lasted only three months and yielded impressive results - energy consumption was reduced more than twofold and there was a significant increase in the number of residents wishing to buy an apartment in this property.

The Minister of Environment of the Republic of Lithuania Kęstutis Mažeika, who presented the awards, praised the coordinated efforts of Marijampolė residents, the municipal administration and UAB Butų ūkis multi-apartment management company in the implementation of the project.

Valius Serbenta, Director of the Housing Energy Efficiency Agency, also positively assessed the results of the renovation in Marijampolė Municipality. According to him, achieving more than 10 percent of renovated apartment buildings is not an easy task, so Marijampolė indeed has the potential to become the renovation capital of Lithuania.

"With this competition, we wanted to encourage residents to be interested in renovation and its benefits. I would like to point out that the title that Marijampolė has earned for the third consecutive year is being conferred by the residents themselves, which shows that there are really many people in Marijampolė who are interested in renovation,” concluded V. Serbenta.