The city wants to become a reference point for street art 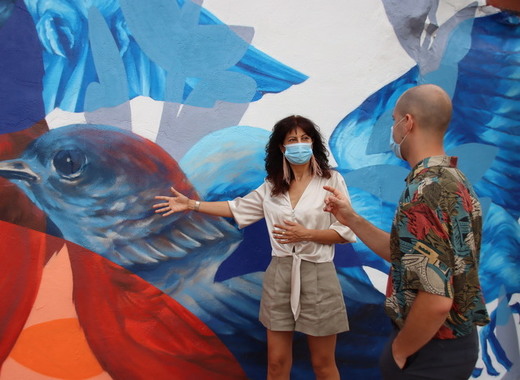 Ana Redondo, the Councillor for Culture and Tourism of Valladolid, visited yesterday some of the new murals that are being painted as part of an ongoing project that seeks to transform previously neglected parts of the Spanish city. That project, conceived back in 2015, is called Distrito Vertical (Vertical District) and is promoted by the Andén 47 cultural space.

Street art has gone a long way towards becoming a socially accepted cultural form and not just an eyesore and a symbol of dilapidation. As a matter of fact, it is precisely previously deteriorated spaces that are now being rejuvenated through the magic of mural painting.

Councillor Redondo went to the España-San Pedro Regalado neighbourhood to see how artistic work was being carried out there. The ongoing art projects are located on Costa Dorada Street (painted by Taquen), Montaña Street (where Ampparito is at work) and the corner of Serranía de Ronda and Tierra de Campos (painted by Corte).

Distrito Vertical has several objectives. On one hand, the idea is to beautify some of the neglected walls and facades in the centre and the more distant residential neighbourhoods, in order to have arresting and impressive images to please the wandering eyes of passersby.

On the other hand, the administration wants to show its support for local artists and help them use the urban environment as the best medium to showcase their work, making it accessible to all and giving them recognition. Six artists, out of 80, were selected back in February, and now with the relaxation of measures they have until the end of the summer to work on their creations.

Next year, the Valladolid City Council is organizing a new call for submissions. All in all, the authorities have set aside some 50 000 euros per year for four years to finance the Distrito Vertical project.

They would like to see Valladolid become a hub for contemporary arts among the likes of Berlin, New York, Los Angeles, London, Sao Paulo or Rotterdam. Likewise, residents can also submit their proposals online for any open walls or facades that they would like to see painted.