Music is back in full swing in the Barcelona Metro halls 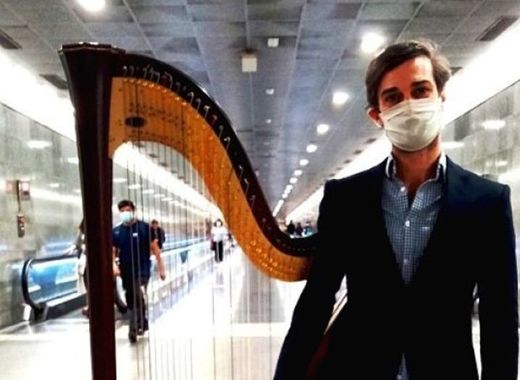 This week sees the last step of the re-opening plan in the wake of the restrictions, as agreed by the Association of Street and Metro Musicians of Barcelona (AMUC) and Transports Metropolitans de Barcelona (TMB). This is aimed at restoring the full 46 points in the subway network where musicians are allowed to perform for the public.

Art will coexist with hygienic precautions

The first step of the re-opening plan, which was a product of a joint provision between the two organizations, was implemented four weeks ago - on 8 June. At that time, only 7 of the so-called Musicians’ Assigned Places – specific spots where the artists can perform – were opened.

Although the number of spots was progressively increased, the artists could only play between 9AM and 20-21PM, which was less than the full operating hours of the city subway.

Following the public measures artists will not be permitted to play wind instruments. For all the rest, the usual safety precautions will be in place, meaning compulsory use of facial masks, microphone protection and keeping distance.

AMUC is a non-profit organization which was created on a voluntary basis among the street artists of the Catalonian capital with the aim of protecting their interests. Since the 2000s it has been involved with the TMB in order to regulate the participation of musicians in the underground passageways.

The transport authority conducts annuals suitability tests in order to determine whether the cultural products offered by the artists would be pleasing to the commuters. These tests are conducted by music professors who are independent of the musicians’ association, with the idea to promote quality.

The non-profit has been organized on democratic and participatory principles with the goal of promoting cultural projects, empathy and diversity. They claim that they could be considered a pre-eminent example for that kind of initiatives in Europe.