They will be available every Friday, Saturday and Sunday on its YouTube channel 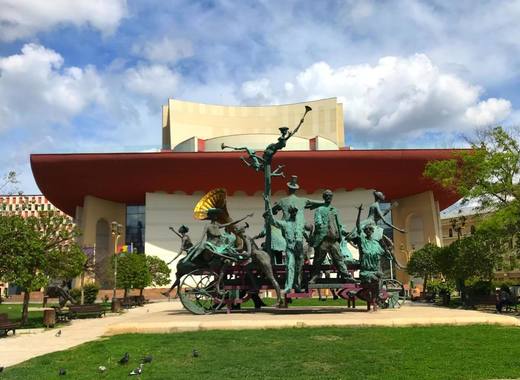 Due to the coronavirus pandemic and the imposed restrictive measures, the National Theatre of Bucharest (TNB) has already started to stream performances from its archive online. The first live stream was held on Friday, 24 April.

The performances will be available at 16:00 on Friday, and 18:00 on Saturday and Sunday. The shows can be watched on the YouTube channel of the theatre. While you're there, you can also watch the TNB Conferences.

The first streamed performance was William Shakespeare’s “The Tempest”, directed by the famous Bulgarian Alexander Morfov. The director of the theatre and also actor Ion Caramitru, stars in the production as Prospero. The cast also features Mihai Călin as Caliban, Istvan Teglas as Ariel, Alexandra Sălceanu as Miranda and Ciprian Nicula playing Ferdinand.

Other performances that will be available during the next week are Friedrich Dürrenmatt’s “The Visit”, I.L.Caragiale’s “Two Lottery Tickets” and “The Blight”, Ion Minulescu’s “Allegro, ma non-troppo”, and Victor Ion Popa’s “Take, Ianke and Cadîr”.

Cultural tradition of over 160 years

The “I.L. Caragiale” National Theatre of Bucharest was established over 160 years ago. It is a landmark-institution for Romanian culture, a true national and cultural brand, and one of the main symbols of Romania.

Numerous actors have grown and evolved on the stage of the theatre during the years. The National Theatre of Bucharest is one of the most frequented Romanian theatres. Before the onset of the COVID-19 pandemic, it had an average of 50 performances and around 20.000 spectators a month, amounting to over 170.000 spectators per year.

During the last few years, under the motto „A new theatre for a new audience”, the National Theatre of Bucharest has built an ambitious repertoire. Its performances consist of reference shows with resonant texts, performed by famous artists, actors from all generations, prestigious directors and stage designers.