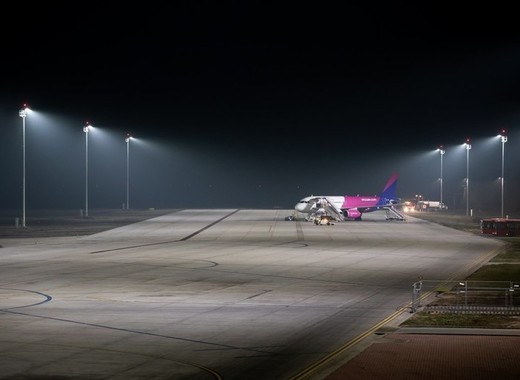 A state-of-the-art lighting system has been installed at the apron of Debrecen International Airport, Debrecen.hu reported. The new LED luminaires can illuminate the area better and are highly energy efficient, meeting all international requirements.

Apron is an airport area designated as a parking place for airplanes. It is also used for loading and unloading freight and refueling aircraft. Shade-free illumination of the aircraft parking area after dark is essential for the handling of luggage and other operations.

The apron of Debrecen Airport spans 23,500 m2 and can accommodate 13 aircraft at a time. Previously, the parking area was illuminated by a metal halide reflector and mobile solutions positioned on a 30-meter-high truss steel column but some of the parking spaces remained shadowed at night.

Now the 30-meter column is gone, having been replaced by seven 20m high steel columns on the northwestern side and seven 24m climbing steel columns on the southeastern side. As part of the lighting system, LED clearance lights and LED obstruction lights were also placed on top of the columns.

Thanks to the new lighting solutions, the Debrecen International Airport will have more parking spaces than before and thus will be able to serve more flights, increasing the airport's capacity.

As the Mayor.EU previously reported, the new LED lighting system is part of the major developments that Hungary’s second biggest airport will undergo this year. They include the construction of a new fence, a new firehouse, renovation of the airport terminal and procurement of passenger safety equipment.

Debrecen municipality regained a majority stake in the airport in 2019 and will be launching tenders for the design of a new runway and a new terminal capable of handling 1.5-2 million passengers a year.