New life for the Press House in Riga 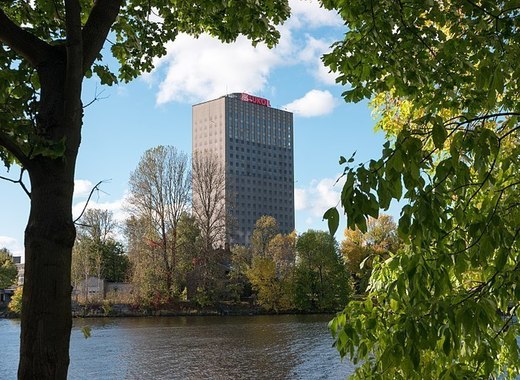 An investment fund with stakeholders from Scandinavia and the Baltics has decided to put 200 million euros towards refurbishing the Press House building in Riga. The project was awarded to an architectural firm by the name of Arhis Arhitekti, whose management presented it to journalists yesterday promising a complete facelift for the decrepit structure.

Despite complete revamping, the original look will be kept

Built in 1978 on the left bank of the Daugava River, the twenty-two story building served as the headquarters of several national media for three decades. It was also the home of publishing houses, a print house and the main censorship office of the then Latvian Soviet Republic.

It was abandoned in 2009 after the economic downturn and after years of decreasing interest towards renting on part of private publications. Since then it has presented an unsightly monument visible from the historical centre of Riga. The insides still contain old newspapers and the walls are covered in graffiti.

Demolition work is expected to start later this month, although this will not affect the body of the main building. That one will be converted into a four-star hotel containing more than 300 rooms.

Adjacent to the Press House, the architects also envision the construction of an office building, commercial centre, a football pitch and a large car parking. In other words, the new site will become a multi-functional business complex without changing the skyline drastically.

Work on this project is expected to be completed two years from now in the summer of 2022.