The Temple of the stone accepted its first visitors last week 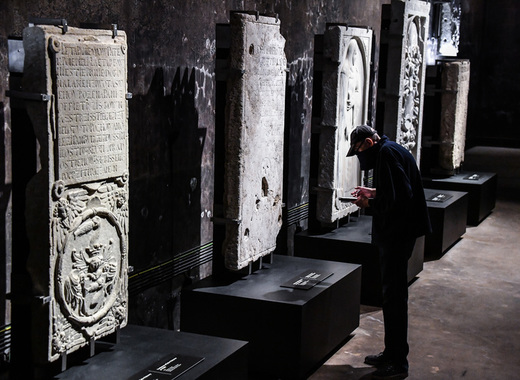 Source: Temple of the Stone receives its first visitor / City of Brno

History addicts in Brno are in for a pleasant surprise – only days ago, a new underground attraction belonging to the Špilberk Castle was opened to visitors. In what used to be water reservoirs until a hundred years ago, visitors can now explore an interesting lapidarium, depicting the history of the Czech city.

Bringing the historical heritage to a new life

The eastern baroque fortifications of the Špilberk castle are now enriched with a whole new experience. Close to a century after they stopped being used and were left to decay, a new use has been found for the two large reservoirs.

Their reconstruction started in 2017 and with some delay caused by the Covid-19 epidemic, were opened to visitors last week, informed the municipal authorities. The underground “temple of stone” exhibition can be visited every day as part of a guided tour.

"By adapting both reservoirs, the museum has gained an attractive space for exhibits documenting defunct city churches, palaces and cemeteries. Of particular interest are fragments from the so-called Royal Chapel or a console with a male face from the Jewish Gate. The whole exhibition is dominated by the Passion of God from 1494 by Valerian Planer," explained the curator of the lapidary collection Filip Kyrc, quoted by the municipal website.

An underground temple of stone in Brno

Visitors to the exhibition will be presented with a valuable collection of stone and stone sculptures - ancient statues, monuments, tombstones from the former Brno cemeteries and stone ornaments from the defunct Brno buildings. Some of these artifacts were exhibited from 1908 to the 1980s in the Křížová corridor of the New Town Hall, where the lapidary of the Brno City Museum was originally located and where several objects remain to this day.

So far, the museum has had only a very small space to exhibit stone artifacts, so most of them were stored in a depository inaccessible to the public. The museum now has a dignified space in the repaired reservoirs. There are more than thirty stone exhibits inside the reservoirs, which are in and of themselves a unique technical monument.

The lapidarium of the Brno City Museum is located in the repaired reservoirs of the Špilberk castle. Video by spilberk.cz/

The new visitor space constitutes one of the latest major reconstructions of Špilberk castle. It amounts to almost CZK 100 million, 90 million of which covered by subsidies. As part of the repair works, part of the eastern and northern walls, the north-eastern bastion and the adjoining entrance to the casemates were rebuilt.

Restoration workshops and warehouses have sprung up in the northern annex. The modifications also affected the exteriors - the restorers repaired the statue of General de Souches, the roads were strengthened and new benches and other furniture were purchased.