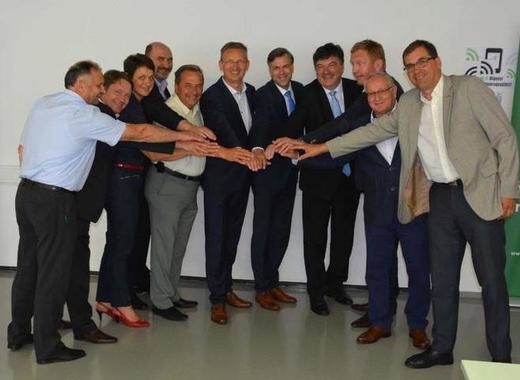 In May 2018, an agreement was signed between nine Slovenian and one Croatian municipalities on the renovation and cooperation regarding the cross-border railway “Ljubljana - Grosuplje, Trebnje - Novo mesto – Metlika - Karlovec – Zagreb”. Mayors of the 10 municipalities recently gathered in Novo Mesto to reaffirm their commitments and set the stage for the start of the reconstruction efforts. The Agreement on the project "Revitalization of the Dolenjska railway" was signed by mayor of Škofljica, Ivan Jordan, mayor of Ivančna Gorica, Dušan Strnad, mayor of Trebnje Alojzij Kastelic, mayor of Mirna Peč, Andrej Kastelic, mayor of Novo mesto Gregor Macedoni, mayor of Semič, Polona Kambič, mayor of Črnomelj, Andrej Kavšek, mayor of Metlika Darko Zevnik and finally the mayor of Grosuplje, dr. Peter Verlič.

The Development Centre of Novo mesto was chosen to be the coordinator of the whole project. The mayor of Novo Mesto stated that the goal of the whole project was to make the Slovenian railway network as well as the towns along it, more competitive. He further reiterated that such cross-border cooperation initiatives which result in sustainable development projects are very highly valued and subsidized by the European Union, and as such, should become more of a priority.

So far, the final cost of the massive project is unknown. However, estimates put expenditures at around the same level as the renovations of the Grosuplje-Kočevje railway, which amounted to 100 million euros. The project is expected to be complete in around 10 years’ time.